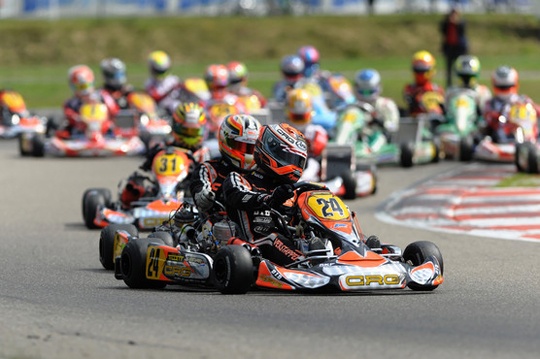 Press Release by: FIA Karting
The CIK-FIA meeting a Genk has kept its promises. There was tough competition and very good performances as the sun returned, and the names of the first two European Champions of 2013 have been revealed, a season that began with the new collaboration with WSK Promotion.

The young Dutchman Max Verstappen has finally won his first European title, in the prestigious KZ category, the elite of international karting. The KZ2 battle has been intense and full of surprises. The Norwegian Emil Antonsen was finally crowned after a suspenseful meeting. At the same time, the global Academy Trophy hopefuls competed equally at the Belgian circuit with an enthusiasm that excited the public during two exciting races. With a win and a second place, the Belgian Maxime Potty is in first place in the standings.

The Academy Trophy gets started

32 participants, 22 nationalities, from Europe, Asia, North America and South America, these figures reflect the success of the formula with the national federations and their young talent. Faced with changing conditions, the inexperienced competitors quickly got used to the equipment and gaps in performance were rapidly reduced. The hero of the day, Maxime Potty, confirms this impression: "I have never experienced such close competition on a single type of kart and between drivers" he explained. "Whether the Parolin chassis, FIM engine or Vega tyres, the differences were very small, we could all run in the same tenth of a second. As a result, the fights were very close. There was a lot of passing and lead changes. I would like to see the photos to see the effect from the outside, but behind the wheel, it was intense. In addition there is an agreeable atmosphere in the Academy paddock, we are close to each other. Regarding the level of competition, it will not be easy, there is already a good field at the first round and I spotted a few drivers who will soon be very competitive." The next meeting will be in July in Italy at the Ortona circuit.

Those who believed that the European title would come down to a duel between the German Riccardo Negro (DR-TM-B'stone) and Italian Marco Zanchetta (Maranello-TM-B'stone) were mistaken. We must never forget that karting is a spectator sport where reversals of fortune are frequent. Negro was first eliminated by a mechanical failure in the Prefinal and could not get into the final. Zanchetta dropped down the ranking a few moments later, then lost all his chances of recovery in a clash in the Final. The situation suddenly looked good for three outsiders, all in a position to win in the last race. There was another win for the Italian Felice Tiene (CRG-Maxter-B'stone) who suffered a retirement in the final at Wackersdorf then a technical problem in qualifying in Genk, and was on an exceptional run in the Final, which gave him third in the Championship. Third on arrival in Belgium, the Swede Joel Johansson (Energy-TM-B'stone) thought seriously about his chances at the beginning, and was virtually the Champion for a few laps. But the Norwegian Emil Antonsen (DR-TM-B'stone) was delighted with second place at halfway through the Final and flew to the title.

A very talented driver despite his young age, Max Verstappen has always been at the forefront of the fight since his debut in Juniors in 2010. But he could never secure a CIK-FIA title. Although this gap is now repaired, it was not without effort from the driver. While he clearly dominated the elite category since the beginning of the meeting, a collision followed by a retirement in the final qualifying heat upped the tension a notch. Max skillfully corrected the situation in the Prefinal and then finished with a good win and a maximum score in the KZ European Championship. He was joined by the Belgian Jonathan Thonon (CRG-Maxter-B'stone) and the Monegasque Charles Leclerc (ART GP-TM-B'stone) on the podium in the race, while Marco Ardigo (Tony Kart-Vortex-B 'stone) and Anthony Abbasse (Sodi-TM-B'stone) following, thanks to their great consistency, are on the Championship podium.