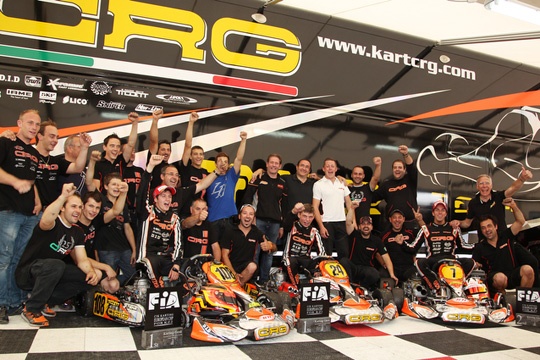 Genk (Belgium). Spectacular success for CRG in Genk's second and decisive round of the European KZ&KZ2 Championships. After the victory in the first round of Wackersdorf, Max Verstappen on CRG-TM dominated also in Belgium securing in this way theEuropean KZ Championship without giving any space to rivals. Jonathan Thonon on CRG-Maxter was on the second step of the podium. In KZ2 Felice Tiene (CRG-Maxter) obtained a strong win which completes the triumph of CRG in the two categories with the gearbox.

VERSTAPPEN NEW EUROPEAN KZ CHAMPION. No difficult calculations were required to decide the winner of the 2013 edition of the European KZ Championship as Max Verstappen simplified all the CIK-FIA maths with a double success that does not leave any doubts: after the win in the first round at Wackersdorf in Germany he put the hammer down also in Belgium and brought home another European title for CRG after the one obtained last year by Jorrit Pex.

The Dutch champion (passionately supported by his father, former F1 driver Jos Verstappen, who prepares TM engines for the son), managed to put in an authoritative win in its first full season in the category despite his young age (Max will turn 16 next 30 September) and to get the second title of the year in KZ after winning the WSK Euro Series title early in June.

THONON COMPLETES CRG'S SUCCESS. CRG's triumph in Genk was completed by the 4 times World champion and one time KZ1 European champion Jonathan Thonon on CRG-Maxter. The Belgian driver in force at CRG led a perfect race obtaining a very good second place behind
Verstappen with a result putting in the stone CRG superiority in this category.

The outcome of the race could have been even more exciting if Jordon Lennox-Lamb on CRG-Parilla had not experienced a technical problem to his engine when a few laps were only left in the Final in Genk. The British driver – last year's KZ2 champion – started from the pole position and everything was in place to complete an all-CRG podium. After giving way to Verstappen who was flying to the success, Lennox kept the second place leading Thonon but at two thirds of the race he suffered an engine failure that deprived him from the joy he already started to taste.

Jorrit Pex, team CRG-Holland on CRG-TM, could have easily slided in the leading group if it were not for a technical problem during one heat and the chain failure. This forced him tostart the Final from the back of the grid (22nd place). He put in a recovery race ending with a more than positive 7th place.

Behind Jorrit Pex was Davide Forè, on CRG-TM belonging to team DTK, as the latter suffered some setup problems and incidents in the heats that did not allow him to emerge from this round has happened early in the month when he managed to win on this same track the last race of the  WSK Euro Series.

FELICE TIENE FROM 84TH TO 1ST. The European Championship of Genk witnessed another exalting page of CRG history with Felice Tiene on CRG-Maxter, producing a deed that deserved to be remembered in the gold pages of International Karting. The Italian driver did not manage to partake in qualifying due to a silly electric contact preventing him to make it to the start. The net result was starting last in all qualifying heats, which meant 84th!

Perhaps someone in his place would have packed hisstuff hading back home without even starting to race, but this did not happen in the case of last year's KF2 World Champion Felice Tiene. He stubbornly started his climb in qualifying heats despite someinconveniences in the heat of the race, and obtained the 36th place in the global ranking (18th place on the starting grid of his pre-Final). In Pre-final he moved up to 4th from P18 (place that was worth the 7th spot of the Final's starting grid). In the Final he took them all! What more to say... he has been great!

Still a bit of regret for Tiene due to how things went in Wackersdorf, as in the Final he was stopped by a problem to the rear bumper in consequence to a bump when he was fourth and ready to get the win. We could have celebrated another European title in KZ2...

The title went to the Norwegian driver Emil Antonsen (DR-TM), second in Genk and fourth in Wackersdorf. Second place of the classification for Joel Johansson (Energy-Tm), and third to Felice Tiene (CRG-Maxter).

Good weekend also for the young Spaniard Alex Palou, on CRG-Maxter in his first season in KZ2. Despite he did not make it to the Final due to a penalty issued in consequence of a jump start in the pre-Final ended in 7th, he showed a constant growth putting his name among that of the strongest protagonists of the category. Palou, already vice KF3 Champion and WSK Euro Series KF3 Champion, laid the foundations for a bright future also in the category with the gears.

The Spanish driver Pedro Hiltbrand (LH-Maxter) could not manage to harvest what premises made think of as he was forced to the retirement in the Final after running a very good qualifying stage taking him to start the Final from thefourth row on the side of Felice Tiene.

QUOTES. Euan Jeffery, team manager CRG: “It has been a really exciting weekend. We hit the target on all fronts and the whole team workedunite hunting the victory. We are sorry for not completing the podium with Lennox in KZ due to an engine failure. Max Verstappen has been absolutely phenomenal, he run a stunning race, as did Thonon. We fully deserved the European KZ Title. The superiority of our package was also evident in KZ2, especially with Felice Tiene that completed an incredible race after missing out on qualifying due to an electric problem. Palou did also a great job. All drivers have shown that our material is at the pinnacle of the category”.

Max Verstappen: “I am really happy on getting my first CIK-FIA title! CRG chassis has been great!I would like to thank my dad for the preparation of the TM engine. We worked hard to get this European title. Mystart from the front row in the Final was good; the grip is higher on the outside therefore I immediately got the second place. Then I got the lead and I focused on driving without looking back. When I actually turned back I realized that I had quite a lot of advantage and I was surprised. In the final laps I tried to nurse the kart to avoid problems. It has been tough but great to win in such a competitive category. I am really happy! Luckily I did not have too much pain to the left hand that I hurt on Saturday's second heat. Now I will have it checked by a doctor as it turned blue...”

Jonathan Thonon: “I am really happy. I got the podium also in the last race here in Genk in the WSK Euro Series. It is a nice track, I like it. Inthis Final I was quick and could win but it was important that Max brought home the championship. Together with Lennox we proved how strong is CRG chassis,independently from the engine supplier, be it Tm, Maxter or Parilla. I would like to thank CRG, Maxter and Tec-Sav engine technician, as well as my mechanic and the chief mechanic for the great job they did”.

Felice Tiene: “Antonesen won the championship, but we proved to be the strongest. We are sorry on how things went in Wackersdorf, otherwise wewould have celebrated also the KZ2 European title here. We all believed we could get a good result and I have always been the quickest. Despite starting all the heats from last I managed to put in quite a good recover. It has all been perfect, the Maxter engine prepared by Savard was very fast, the chassis... drove on its own. All was really perfect. I would like to thank Tinini and CRG, Savard and all technicians for the help that provided me with in such a winning weekend”.

All results of the weekend will be available on line at the websites www.cikfia.com and www.cikfiachampionship.com.