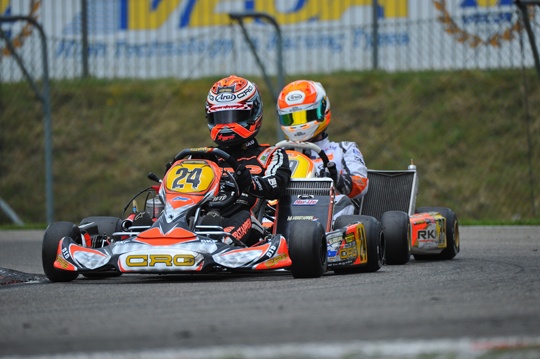 Author: Vroomkart International
First CIK title for the fast Dutch Crg driver. He takes the lead in the early stages of the final and runs away with final and title win.
photo © Sportinphoto

CIK European KZ Championship Rnd.2, Genk (B)
In the final Verstappen is unchallenged. He also stops the fastest lap of the race (51”593) and wins ahead of a revitalized Thonon and of ART Grand Prix star Charles Leclerc, who demonstrated yet again a very mature race conduct.
For Lennox-Lamb – out while strongly in 2nd due to a mechanical problem – the chance of second place in the final and in the championship disappears on lap 13.
De Conto is protagonist of a massive comeback from 12th all the way to 4th with Ardigò and Abbasse on his shadow to complete the championship podium. Pex, Foré, Dreezen and Toninelli round up the top-10.

In the second race of the Academy Trophy, raced just before the KZ final, Melgar (ESP) took the win ahead of Potty (BEL) and Petrov (RUS)