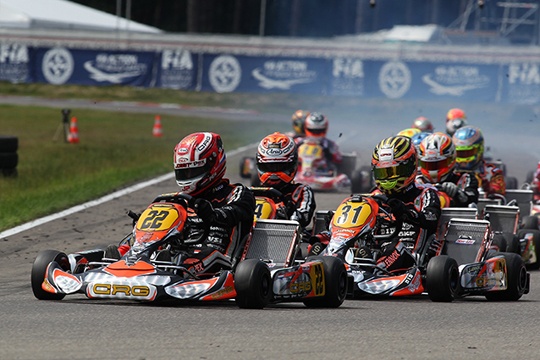 Press Release by: CRG Racing Team
Max Verstappen won the first qualifying heat but in the second the victory went to team mate Jordon Lennox-Lamb, and Verstappen is sent off at the start. Jonathan Thonon and Davide Forè on the rampage too. Excellent performance for FeliceTiene and Alex Palou in KZ2. Pedro Hiltdrand (LH) slowed down by a technical problem.
Genk (Belgium). Belgium welcomed the second and last round of the KZ European Championship with a weather more winterly than what it is supposed to be in summer; CRG has been absolute protagonist so far with its drivers, starting from Max Verstappen (CRG-Tm), absolute ruler of Friday and of the first heat on Saturday, while in the second qualifying heat held today Jordon Lennox-Lamb (CRG-Parilla) got the win.

In the first qualifying heat of Saturday, behind Verstappen, CRG result was rounded up by the second position scored by Jorrit Pex (CRG-Tm), the fourth obtained by Jonathan Thonon (CRG-Maxter) and the fifth by Jordon Lennox-Lamb (CRG-Parilla). In the second heat the victory went to Lennox, with Pex fifth and Thononsixth. Davide Forè (CRG-Tm) ended14th in the second heat after the retirement in the first.

VERSTAPPEN IN & OUT. In such a winning context for CRG there is also some regret for Max Verstappen's exit soon after the start of heat two as the Dutch was sent off in the heat of the start.

In truth, Verstappen did not put in a great start but it is also true that it should not be possible to be sent off by the impetuosity of rivals in the first laps. Verstappen is still one of the major contenders of this KZ European Championship as he still leads the group after winning the first race held in  Wackersdorf. The championship will be decided in the Pre-Final and mostly in the Final to be held on Sunday. Verstappen will start the Pre-Final from the ninth place of the grid.

POLE FOR LENNOX IN THE PRE-FINAL.  The second part of Saturday was led by Jordon Lennox-Lamb, who did not have rivals after Verstappen's exit. The British driver of CRG got an easy win getting an early lead and keeping it until the flag.

Thanks to this victory and the fifth place in heatone, Lennox will start the Pre-Final on Sunday from the pole position. The all CRG front row will be completed by Jorrit Pex. Thonon will start from the fifth spot of the grid,  Verstappen from the 9th and Forè from the 21st.

TIENE AND PALOU “LIONS” IN KZ2.  Bitter-sweet situation in KZ2 for CRG where the Italian outfit colors are defended by Felice Tiene and Alex Palou, both on CRG-Maxter and both putting in a “lion” performance in Belgium so far. Tiene started from the back as he could not partake in qualifying due to an electric problem and has been involved in some incidents that penalyzed his result in the heats. Palou impressed for his growth during the weekend instead. He has been quicker than ever in the category with the shift and produced a series of good races. The Spaniard Pedro Hiltbrand competing with team LH has also been very competitive despite being also stuck in some racing inconveniences.

KZ poleman Jordon Lennox-Lamb commented in this way his victory in the second heat on Saturday: “It has been a good victory and I also got a good third place in qualifying where I usually struggle a bit topost the time. In the second heat I started well and did not have problems. I also posted some fast laps and set the quickest lap of the race. It is good for CRG and for Parilla, with this engine unit we are very competitive now. Putting in a good start will be crucial in the Prefinal and in the Final.”

CLASSIFICATION AFTER THE FIRST ROUND:

TV COVERAGE.  The races of the European Championship scheduled for Sunday 30 June will be available through LIVE STREAMING on the websites www.cikfia.com and www.cikfiachampionship.com. In Italy, RAI Sport will show them recorded on July the 5th.

PROGRAMME (GMT+1).  Sunday 30 June. Pre-finals from 11.50; Finals from 14.20.
All results of the weekend will be available on line at the websites www.cikfia.com and www.cikfiachampionship.com