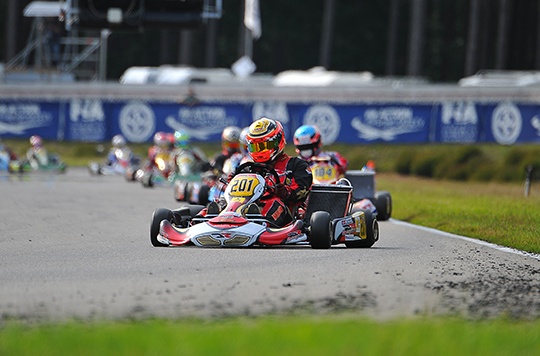 CIK European KZ2 Championship Rnd.2, Genk (B)
Overall each driver raced six heats, and after the ones of the afternoon Habulin and Negro are surprisingly off the top-5, with the Slovenian 9th overall and the Italian with German licence 11th overall due to the bad heat caused by the slippery track and a penalty for jump start.
New Zealander Bray grabs row 2 starting position for prefinal A next to Schmitz, while Johansson and Wiggers will sit on row 2 for prefinal B.
Poleman Kenny Charles can’t do better than 17th overall following two bad heats, Oberg drops to 12th overall as a result of a retirement for a gear lever failure (he takes 2nd twice and 3rd three times), and Palou 21st overall.
Good performance by Australian Hays, 14th overall with 5 top-10 results, and by Italy’s Tilloca, 16th overall.

Don’t miss the prefinals on Live Streaming starting from 11.50 am