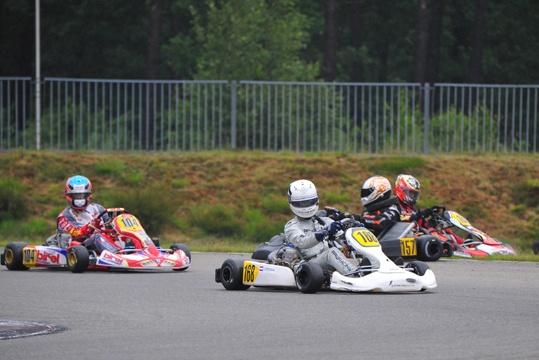 Author: Vroomkart International
The uncertain weather conditions of the second day of official session in Genk (B) are taking a toll on the participants of the second round of the European KZ-KZ2 Championship.
photos © Sportinphoto

No clear pattern in KZ2
The protagonists of the first round, those who are still in contention for the title, have a lot to lose as a result of the tricky conditions of the circuit. The morning was almost entirely dedicated to the warm-up, and after one heat in KZ2 the track was already quite tricky as a result of a light shower while the drivers were already in the heat of the battle. Laptimes went up of over 20” than those stopped in the previous heat, and conditions got even worst in the third heat, with some opting for slick gambling the track would dry out in time. It didn’t happen!
The winners of the first 6 heats of the day are Negro (DR/Tm), twice Szymkowiak (Zanardi/Tm), Bray (GP Racing/Tm), Wiggers (Crg/Tm), Midrla (Birel/Tm).

Bad luck for Tiene, unable to come back as he did on Friday due to the track conditions. Tough second heat also for Negro and Oberg, the first dropping to the back of the field from the lead on lap 3 and recovering to finish 14th, and the PDB driver, starting from the lead and forced to retire at the first corner after snapping the gear lever.

Verstappen takes off in KZ
The first heat of the KZ category saw the Dutch Crg driver take a huge win over his rivals, with his team mate Pex closing in 2nd 7” down. Ardigò is author of a brilliant comeback from 10th on starting grid all the way to 3rd, while Leclerc fights with Thonon for 3rd for most of the race, dropping behind the 4-time world champion and his team mate Lennox-Lamb in the last few laps. Hanley follows in 7th ahead of Abbasse, the French struggling after starting from row 2, just like Lammers and De Conto, not an easy race for both closing 11th and 14th respectively.

The afteroon heats will decide the starting grid for Sunday's final phase, which will begin at 11.50am with the prefinals.