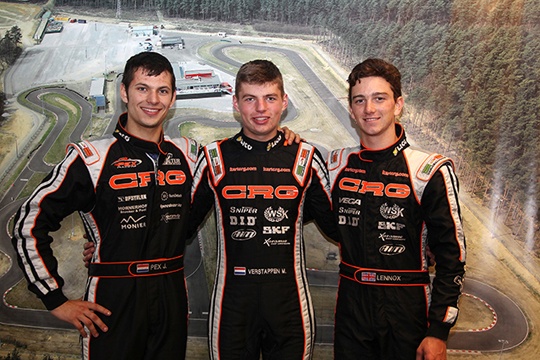 Press Release by: CRG Racing Team
Pole position for current championship leader Max Verstappen, second time for Jorrit Pex and third for Jordon Lennox-Lamb. Jonathan Thonon and Davide Foré make it 5 CRG drivers in the top 7. Difficult start for Felice Tiene in KZ2, good Alex Palou.
Genk (Belgio). Rolling start for CRG works team in Genk (Belgium) during the second and decisive round of the CIK-FIA KZ&KZ2 European Championships, as the drivers of the Italian outfit were under the spotlight with a stunning 1-2-3 in Friday's KZ qualifying. Max Verstappen, Jorrit Pex and Jordon Lennox-Lamb have been the three main protagonists of the day as they set the three quickest times. The good result for CRG was completed by the fifth place of JonathanThonon and the seventh obtained by Davide Forè.

CRG UNCATCHABLE IN KZ QUALY. The Dutch Max Verstappen (CRG-Tm) – current classification leader after the round of Wackersdorf held last 19 May – set the pace with a good  51”385. He was followed by the fellow color-bearers Jorrit Pex (CRG-Tm - CRG Holland) and Jordon Lennox-Lamb (CRG-Parilla), with the first – last year's European KZ1 champion – second just 31 thousands shy of the leader and the latter third at 44 thousands.

Very good performance came also from the other two CRG works drivers: the home hero Jonathan Thonon (CRG-Maxter), 2011 world champion on this track, was fifth at 98thousands from Verstappen, and the Italian Davide Forè (CRG-Tm - team DTK), was seventh at a bit more than a tenth from the pole.

Things look pretty good for CRG and a good battle will certainly come up next to get the European title that will be decided on Sunday afternoon.

Max Verstappen commented in this way his pole position obtained on Friday: “In my first laps somebody stopped me a little therefore I lost time andthen I got a bit of under-steer but still my pace was very consistent. Tomorrow I will try to win and, more importantly, to keep the rivals involved in thechampionship fight behind me”.

TIENE AND PALOU HUNTING FOR A GOOD RESULT IN KZ2.  Fairly good news for CRG also in KZ2 where the works team was represented by  Felice Tiene and Alex Palou, both on CRG-Maxter. Felice Tiene's quest started a bit troubled as the Italian couldnot partake in qualifying due to an electric problem that did not make his engine switch on. For this reason Tiene will always have to start qualifying heats from the last spot of the grid and a long recover will await him. He is still optimist though: “There's still a long way to go before Sunday's final – said Tiene – calculations will come in the end. Despite the outcome of qualifying I am still quite optimist for the race.” The start of the weekend has been positive for Alex Palou, as he managed to put in very good results including a third place. Saturday's qualifying heats will be crucial.

Hopes high also for the four times world champion and home driver in Genk Jonathan Thonon: “I am happy as on Wednesday I was the quickest and I was quick on Thursday too. In qualifying I would have made some changes but then I changed my mind. That was a pity as I am pretty sure I could have improved my current fifth place. Anyway, 5 CRG chassis in the top 7 is a very good start for the team. My kart is great as my Maxter engine that hasbeen improved by Tec-Sav, therefore I cannot hope but for a good result. I would like to thank also my mechanic that is supporting me at best.”


IN TV.  The races of the European Championship taking place next Sunday 30 June can be followed through LIVE STREAMING on the websites www.cikfia.com and www.cikfiachampionship.com. RAI Sport will show them recorded next 5 July.