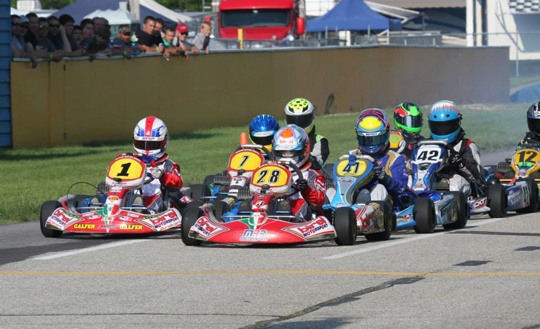 Press Release by: Birel
There is no mistake that Birel and US Importer, MRP Motorsport/Birel America, has put a large emphasis on the junior development ladder in karting.

In the past few weeks, the dominance that started in Florida Winter Tour and SW Regional racing continues into the Midwest.

“It is especially rewarding to see first or second year Junior drivers coming into a bigger kart and being so competitive,” said Tim Lobaugh, Engineer & Team Manager for MRP/Birel America. “These drivers have gone from winning in our Cadet-spec C28R chassis and now are immediately front-runners and winners with the full-sized RY30-S5 chassis. It speaks volumes for both the chassis and the work done to prepare them for that jump.”

With the WKA Manuafacturer’s Cup Series heading to JET Karting in South Bend, IN this weekend, Birel racers have prepared by being a dominant force in regional competition at that same venue, with Birel drivers scoring wins or podiums in the Route 66 Sprint Series and Great Lakes Sprint Series. To add to this feat, strong results were had in the USPKS Series in Mooresville where Mark Fineis scored a win joined by several podiums from David Malukas, Andrew Castelucci, Mike McAndrews & Matt Solarczyk.

Fineis has come on strong as of late, scoring podiums at the Route 66 Sprint Series event at Jet Karting in Sportsman and Rookie 1. The Yamaha Rookie 1 category has been dominated by the Birel C28R drivers, scoring podium sweeps in both Route 66 and Great Lakes Sprint Series competition. Gage Rodgers taking top honors on day 1 and Castelucci taking the victory over Rogers on day 2 for Route 66, then a week later, Birel again strikes in both Rookie 1 and Yamaha Sportsman with Fineis and Castelucci splitting wins with Rodgers on the podium again. Malukas spent the GLSS weekend scoring 4 podiums with a 2nd in Komet Sportsman and three 3rd place finishes in Sportsman, Komet and Cadet, all aboard the C28R. Jack Miller added another Birel podium in MiniRok.

In the Junior category, the RY30-S5 has been the chassis of choice. Birel drivers also performed a podium sweep in the high-stakes “Junior Shootout” during the Route 66 event. Grant Quinlan was chased by fellow Birel drivers Mike McAndrews and Becker Reardon. Quinlan would also go on to win the Junior Lite final as well. For GLSS, Matt Solarczyk carried the Birel banner with two wins, Yamaha Jr. Heavy and Komet Jr. Heavy, and then followed it up in the Komet Lite class with a strong 2nd place result and fastest race lap.