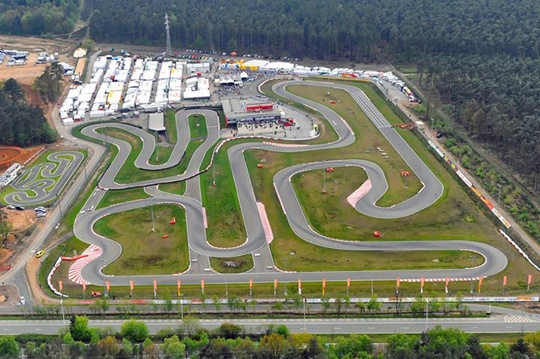 Press Release by: FIA Karting
The famous Belgian Horensbergdam circuit at Genk will see the names of the first two European Champions of 2013 announced on Sunday evening, in the KZ and KZ2 categories...
... while hosting the start of the fourth season of the CIK-FIA Academy Trophy, a global competition for the most promising young kart drivers. This means the coming event has many attractions for fans.

The new format of the European competitions, now organised with WSK Promotion, raises the pressure among the title contenders who absolutely need to succeed with their final score. At this stage, there is no room for error and below par performances will have serious consequences. Watching out for unnecessary noise will be part of the criteria to be taken into account in the time trials; but probably specific to Genk, the changeable weather, the track surface and the very technical track may influence the results more significantly.

Battle of titans in KZ

Although there are 15 drivers that can mathematically win the European Championship, there are really only six favourites in the KZ field. We may well see a duel between the Dutch drivers Max Verstappen (CRG-TM-B'stone), who dominated the opening round at Wackersdorf and is representative of the new wave of karting stars, and Bas Lammers (Intrepid- TM-B'stone) who is a major figure in the discipline with a strong track record. For his 15 years, Max has strong advantages: very high performance since the beginning of the year, perfect knowledge of the track and fighting spirit. Almost twice as old at 28 years, a triple European Champion and the winner of the World Cup in 2012, Lammers has always impressed with his ability to exponentially improve his driving and his equipment on special occasions. But for the sake of the uncertainty of the race let's hope for challenges from other prestigious competitors like the Italian Marco Ardigo (Tony Kart-Vortex-B'stone), a fearsome third and nine points behind the leader, or the French driver Anthony Abbasse (Sodi-TM-B'stone) in search of an international title, the Briton Jordon Lennox-Lamb (CRG-Parilla-B'stone) who won the KZ2 World Cup last year, and the third Dutchman Jorrit Pex (CRG-TM-B'stone), the defending champion.

The confrontation looks close between two drivers who have shared the starring role in the class for several months. The leader of the standings with 25 points, Riccardo Negro (DR-TM-B'stone), here with a German license, will meet his most faithful and toughest opponent on the track, the Italian Marco Zanchetta (Maranello-TM-B'stone) who is on 20 points. More consistent and confident, Riccardo isn't lacking the attributes to resist Marco's challenge, who is often faster and used to making beautiful comebacks. The outcome is very uncertain before the start of hostilities. The Swede Joel Johansson (Energy-TM-B'stone), who can also hope for victory, will undoubtedly have a say in the final battle, while the places of honour will motivate following competitors such as the Norwegian Emil Antonsen (DR-TM-B'stone), the German Dominik Schmidt (CRG-TM-B'stone) or the Swede Douglas Lundberg (Maranello-TM-B'stone).

Back to basics for season four of the Academy Trophy

The CIK-FIA Academy Trophy is refocusing on its original purpose which is to promote the emergence of young talent from around the world, thanks to an inexpensive single-make format.

In 2013, there will be no drivers in this competition who are accustomed to international events and have the means to prove themselves in other high-level competitions. With 33 representatives from 23 nations, the Academy Trophy more than ever offers a major opportunity to get noticed. The usability of this formula is also one of the highlights. This year, Parolin will provide the chassis and FIM the engines, all drawn randomly, while Vega will for the first time supply the tyres, all within very reasonable budgets.