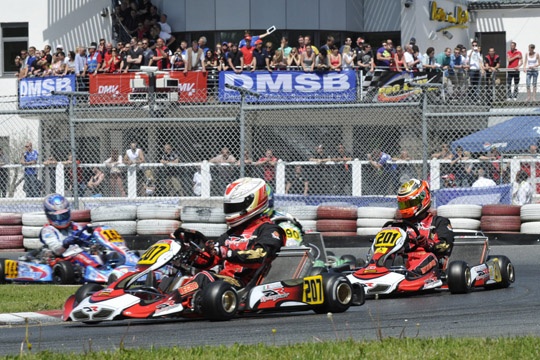 Press Release by: WSK
Verstappen (CRG-TM KZ) and Negro (DR-TM KZ2) are the leaders of the standings.
The races LIVE on Sunday 30th on www.cikfia.tv and www.cikfiachampionship.com
IN GENK THE LAST ROUND OF THE CIK-FIA EUROPEAN CHAMPIONSHIP FOR KZ AND KZ2.
Engines are roaring and drivers are looking forward to the final round of the CIK-FIA European Championship for the KZ and KZ2 categories. The event is hosted by the Horensbergdam Circuit of Genk, in Belgium, next weekend. The event in Genk is the second and last round of 2013 Championship reserved to the categories with six-speed gearbox, which started last month on the German track of Wackersdorf. There are 137 entrants on the whole. The venue for this thrilling race is the 1,350 metre long track near the town of Genk, in the province of Limburg.
VERSTAPPEN LEADS IN KZ.
The great favourite in KZ is the Dutch Max Verstappen (CRG-TM-Bridgestone), who arrives in Belgium as the leader of the category. For his fellow countryman, Bas Lammers (Intrepid-TM-Bridgestone), second with a five-point gap, the race is not going to be a piece of cake. However, Lammers showed to be in peak physical form in the race in Germany: his excellent performance in the final says that he is on the list of the main rivals of the leader. On the list there is also the Italian Marco Ardigò (Tony Kart-Vortex-Bridgestone), who deservedly achieved the podium of Wackersdorf. Among the other participants who can aim at success also the French Anthony Abbasse (Sodi-TM-Bridgestone), the English Jordon Lennox-Lamb (CRG-Parilla-Bridgestone) and the Dutch Jorrit Pex (CRG-TM-Bridgestone): they are definitely the most dangerous rivals for Verstappen, given that they occupy the fourth, the fifth and the sixth place of the current standings.
NEGRO LEADER IN KZ2.
KZ2 is characterized by the great duel between the leader, the Italian Riccardo Negro (DR-TM-Bridgestone), and his closest pursuer, the other Italian Marco Zanchetta (Maranello-TM-Bridgestone). The two drivers are, this year, the main protagonists of this category, as we understood during the first round of the season. Anyway, the pack of the other pursuers seems to be ready to fight inch by inch: the final result of this category is definitely unpredictable. Among the other protagonists: in Germany the performance of the Swedish Joel Johansson (Energy-TM-Bridgestone), third of the standings after clinching the pole position in the Pre-finals, was impressive. Another dangerous rivals for the two main protagonists is the Norwegian Emil Antonsen, Negro's teammate as well as the German Dominik Schmidt (CRG-TM-Bridgestone) and the Swedish Douglas Lundberg (Maranello-TM-Bridgestone), who occupy the following three positions of the current standings.
THE EVENT OF GENK ALL ON VIDEO
For the promotion of the CIK-FIA events at world and European level, WSK Promotion has guaranteed - in Belgium too - the TV coverage of the race in Genk. Broadcasts begin with the live streaming of the final phase on www.cikfiachampionship.com and www.cikfia.tv. Cameras will start shooting on Sunday 30th June, from the Pre-finals. The TV channel Rai Sport will air the pre-recorded broadcast in the following days. On 5th July, as usual, the Friday special report after the race.
IN GENK THE FIRST ROUND OF THE CIK-FIA KARTING ACADEMY TROPHY.
There are 33 entrants to the CIK-FIA Karting Academy Trophy, which is about to run its first round out of three overall rounds right in Genk. Drivers aged between 13 and 15 can enter this one-make trophy behind the wheel of Parolin-FIM-Vega karts. Among the emerging drivers, the new name is Pedro Piquet, son of the three-time F1 World Champion Nelson Piquet.