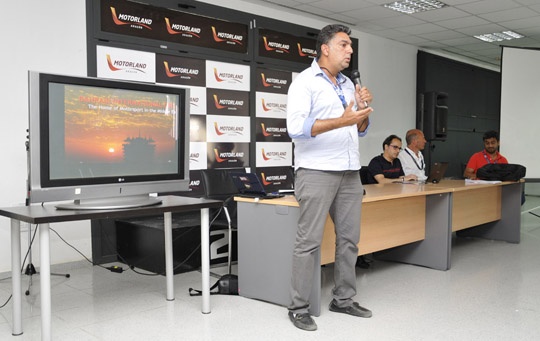 Press Release by: WSK
The event was presented in Alcaniz by the managers of the circuit in Sakhir.

Great season finale in Bahrain.
The Viva Karting Track of Sakhir, in Bahrain, will host the last round of the CIK-FIA World Championship for the KF and KF Junior categories, on schedule from next 21st to 23rd November. The race, which closes this terrific 2013 international event, was presented in Spain in the presence of the teams and of the drivers of the two categories as well as to the journalists during the opening round of the CIK-FIA KF and KFJ European Championship in Alcaniz.

The World Championship race in the Persian Gulf at night.

During the weekend at the Motorland Aragòn, those in charge of the World Championship organization held a meeting with the representatives of international karting. Luca De Donno, President of WSK Promotion - the promoter of the event-, introduced Mr. Fayez Ramzy Fayez and Mr. Abdulaziz al Thawadi, the operations directors of the circuit in Bahrain, in the presence of Randolph Bath, CIK-FIA Observer. The track is set near Sakhir and it is a part of the big facility which, on the nearby circuit, hosts the Formula 1 Bahrain GP. Also the track reserved to karting has a lighting system which allows to race at night: an opportunity which will be seized in the World Championship of November. It is the first time that the Kingdom of Bahrain, an archipelago of 33 islands on the western side of the Persian Gulf between the coasts of Saudi Arabia and Qatar, hosts the CIK-FIA World KF and KFJ Championship.

The representatives of the Viva Karting Track gave some details about the hospitality reserved to the participants: a double bedroom for each entrant from 18th to 24th November. Shuttle service to and from the circuit is included, as well as catering and equipment transportation, which is free of charge up to 6 cubic metres of volume.

The Circuit of Sakhir.

The Viva Karting Track is the kart circuit of the motor-racing facility of Sakhir. The managers described its characteristics, focusing on its ten different configurations and on its lighting system which allows to race at night. The version used for international events provides a 1,414 metre long track and it will available from 20th to 23rd November for the World Championship round.