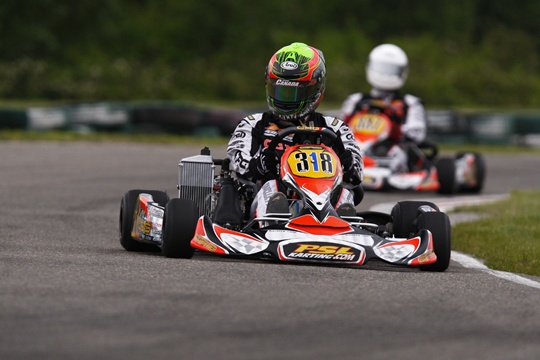 Press Release by: CRG
Pier-Luc Ouellette back on top after seven month hiatus; CRGs excel in round two
Trois-Rivières, June 19, 2013 - With the Canadian karting season now in full swing, Team PSL Karting was back in action last weekend at the second round of the 2013 Coupe du Quebec series. Taking to the 1.2km SRA Karting circuit northeast of Montreal, a host of drivers would put the PSL/CRG package at the top of the time sheets as they battled the challenging layout at SRA and a rain-soaked day. Most notably, two-time Rotax DD2 World Champion Pier-Luc Ouellette was back with the PSL stable, this time tackling the Rotax Senior ranks and displaying a dominating performance in his first race of 2013.


After seven months out of a kart, Pier-Luc Ouellette proved why his is a two-time World Champion. Fast all weekend starting with Saturday's official practice, Ouellette pulled off the sweep of the Rotax Senior on-track action. Starting off with fast time in qualifying to score the pole position, Ouellette then went on to win both inverted heats. Again the victor in the prefinal race, Ouellette held off early advances in the final to claim the main event victory to start his 2013 campaign off right. Ouellette will be back in action with Team PSL Karting at the next Eastern Canadian Karting Championship (ECKC) round, taking on both Rotax Senior and DD2.
"PLO displayed great pace from Saturday, considering he's been out of a kart for seven months," explained PSL Karting Team Manager Andrew Campbell. "Teaming Pier-Luc with tuner Phil "Coy" Arbour was a natural and easy decision, as there is great chemistry and racing history, between the duo. For me personally, I'm quite excited for more good results from PLO and Coy in two weeks at the ECKC Goodwood event."
Marc-Andre Levesque and Luis Costa would join Ouellette in the Senior competition, with both posting solid results. Struggling with the rain and massive puddles, and overcoming the poor visibility, Levesque showed strong pace throughout the weekend, proving the strength of the CRG product. Costa also displayed a great performance in his first ever race, as this new driver put his skills to the test in the racy regional series.
In DD2 action, two Team PSL Karting pilots put on a great display at SRA Karting. Coupe du Quebec round one winner Alessandro Bizzotto again proved the speed of the PSL/CRG DD2 package, claiming the pole position and posting second place results in both heats as well as fastest race laps in each. The prefinal would see Bizzotto cross in third, and the rising talent held station in the final to claim the final step of the podium. Samuel Drouin also had the pace to battle at the front of the field. Posting sixth in qualifying, racing action saw Drouin post fourth and eighth in the two heats and then power up to second in the prefinal before finishing just behind his teammate in the final. DD2 Masters pilot Danny St-Hilaire was also fast in the over-32 category, but a tire issue in tech erased his solid effort on the weekend.
After earning podium finishes in recent ECKC racing and the first round of the Coupe du Quebec, rising talent Thierry Cote made a return trip to the Mini Max podium this past weekend. Qualifying fourth, Cote would battle changing weather conditions during wheel-to-wheel action. Moving to third in a dry heat one, the heavens would open up in heat two as Cote improved to second. Posting third for the prefinal, Cote played it smart in the main event as he passed for the final podium position after battling with two fellow competitors, and posted fast lap in the process.

"Thierry had an excellent drive all weekend, as all drivers struggled with the heavy rain Cote was able to overcome the conditions with a solid performance," added Dominic Labrecque, President of PSL Karting.
In the youngest class, PSL Montreal’s Marc-Antoine Joseph showcased his wet weather racing skills to put his PSL/CRG package on top during the second Micro Max heat race. The young gun then held on to score a second place podium result, bettering from his fourth place finish in round one.
Several CRG branded drivers also found success at the SRA facility. Christophe Paquet of ACM put on a noticeable performance in the Coupe du Quebec action, along with his driver coach and mechanic, Alex Louet, owner of ACM. Paquet was the dominant driver in the Rotax Junior division, as the pilot scored pole position, one heat win and a 13.837 second victory in the final to put CRG on top once again. Dominic Legrand was also the dominant driver in the DD2 category, and added another victory for CRG. After clocking second in qualifying to put CRGs 1-2, Legrand went on to sweep the remainder of the day, topping the charts and posting the final win by over two seconds. In Briggs Senior action, Nicholas Michaud put CRG on the podium once again, taking second place honours and posting fastest race lap as well as taking the heat two win.
Team PSL Karting will next take on ECKC action at the second doubleheader weekend on the schedule, June 28-30 at Goodwood Kartways in Stouffville, Ontario with the Coupe du Quebec resuming July 13-14 at Karting Grand-Mere for round three.
To learn more about the World's #1 CRG distributor, sales & service, arrive & drive opportunities, PSL racing engines or dealer opportunities, please visitwww.pslkarting.com or www.pslkartingusa.com