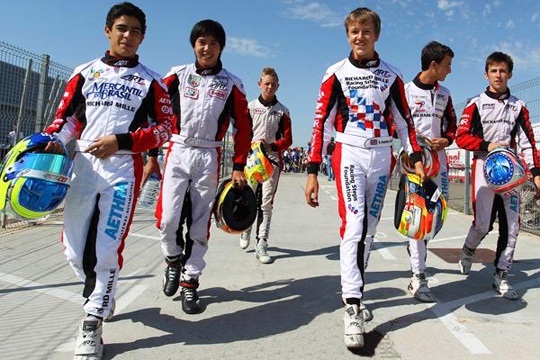 Press Release by: Art Grand Prix
A rollercoaster of emotions, that’s how the opening round of the CIK European KF & KFJ Championship held at Motorland Aragon in Alcaniz, Spain, on 14-16th June , can be described.

Fielding two drivers in KF category and three in KF Junior, the ART Grand Prix Factory Team started the Spanish weekend with some very promising results, but as always in karting, it ain’t over until it’s over.

In KF, Ben Barnicoat set the 2nd fastest laptime in qualifying, a mere 2 hundredths of a second down from pole. And the fast Brit carried on by taking four straight wins (and one fastest lap) in the heats to start the prefinal from pole. In the meantime, French driver Valentin Moineault made up for the DNF in the first heat by taking two 8th and one 5th position in the remaining heats to start the prefinal from 10th. With the two prefinals system, only the first 17 in each prefinal would get access to the final - the only race to award points towards the championship. So Prefinal A saw both ART Grand Prix drivers trying to capitalize the work done so far in order to start the final in the best position. And Barnicoat seemed just able to do that, keeping the lead at the start and managing to keep pursuers at bay. Until lap 5, when his used tyres started to give in, inch by inch, tenth by tenth, to his direct rivals. In a matter of two laps the British driver dropped from the lead to 5th, now chasing hard the top four all close within 1”. Two laps to go, and Barnicoat stopped the fastest lap of the race (58”495) then tried to sneak in through as the pack all tight went on the inside of the third hairpin, but no room was left for the Brit who collected Tiene right with him dropping down to 10th where he would finish. Moineault had a less eventful race, constantly racing in the top 10 and closing in 7th taking advantage of the last few laps mishap.

The final seemed compromised, but the ART Grand Prix boys could still have their say with a new set of tyres at their disposal. Ready for a fight, Moineault and Barnicoat moved from P14 and P20 respectively on the starting grid to P9 and P13 already in the first lap. The following saw the two moving up to 8th and 11th respectively, in hot pursuit for higher positions and more championship points. But Lap 6 would prove disastrous for the two ART Grand Prix boys coming together at the hairpin on turn 9 as the group bunched up, with Moineault going all over his team mate and dropping down to 20th, with the Brit down to 14th. With the spring valve coming out, Barnicoat was forced to hold it for the remainder of the race, and still managed to lap consistently with the fastest. With his unwavering tenacity, he would put his head down managing to recover all the way to 9th, as the French closed in 13th.

The contacts did not spare anyone during the weekend, including the drivers of the ART Grand Prix satellite teams like Tujula, making up few positions in the prefinal after a steady heat session, but involved in a contact in the early stages of the final ruining his chances of a comeback. Contacts which were even more disastrous for Collard, Laaksonen and Pym, none of them able to make it to the final.

In KFJ, the weekend started and ended with the same ART Grand Prix driver leaving a mark. Brazil’s Sergio Sette Camara showed big signs of progress already by stopping the fastest lap of the ART Grand Prix lot in qualifying practice. Sergio went on with a good series of results in the heats, finishing twice in the top 10 and also grabbing the last heat win – the first ever for the team in the category - an outstanding result for the ART Grand Prix camp. Also ART Grand Prix satellite team drivers Peltola and Haapalainen had few top 10 results in the heats, but a bad result in one heat following few too many contacts forcing them to start the prefinal from mid grid.

Comes the prefinal, and Sergio is off to a good start, managing to keep away from trouble and keeping the position. In a matter of few laps the young Brazilian moved up to 4th, then to 3rd, fighting hard to find a gap to move past for 2nd, but having to settle for 4th at the end, worth P8 on the final starting grid as a result of the two prefinals system. Prefinals that proved fatal for the other ART Grand Prix factory driver Diego Borrelli, starting from the back of the field and unable to make it to the top 17, as well as for ART Grand Prix satellite team drivers Peltola, Haapalainen and Bonduel, all very close to make the break line but stuck in hard fought scraps.

Sette Camara was the only one to reach the final, and he did make a tremendous effort to keep focused. The first few laps saw him drop to 13th, then move up to 12th, then 14th, then back to 11th, for a true rollercoaster of emotions. Sergio held tight, never lost the concentration, and went on to grab 9th with two laps to go, also stopping a lap below the 1’01” mark, one of only four to do this.

Few exclusions advanced Sergio to 7th in the end, providing a big boost for the hopes of the team to build up on this result in the decisive round in Ortona, Italy, on 21st July.

“The result in KF is definitely not what we expected, but we have to accept the response of the track. It’s a shame because despite the prefinal, we still had a chance to land a top-5 result in the final and have an opportunity to go for the championship title in Ortona. Now it’s going to be very difficult, but I’m pleased to see that our equipment performs very well, we developed few components which work well, and we will do likewise in Ortona. Big congratulations also to Sergio, he’s been working very hard and his performance in Alcaniz repays all our efforts.”

"To say I’m gutted doesn’t really explain my feelings right now. We were going so well in the heats, the pace was there, and we decided to save the new tyres for the final. In prefinal I started well, but couldn’t keep the lead, I stayed with the top pack, also stopped fastest lap but then I didn’t expect everyone going for the same piece of tarmac at the hairpin and unfortunately I collected Tiene. In the final I had the opportunity to get a top 5, maybe even the podium, but it just shows how things can change... oh well, I can't go back and change it now! Onto the next race bigger and stronger!"

“We hoped for something more in the final, but I’m so happy on how the weekend went. First I managed to win the first ever heat in KF Junior for the ART Grand Prix Factory Team in an international race. Then in the prefinal I stayed with the top drivers all the way through and managed to fight for 2nd place till the very end. We managed to carry our speed consistently throughout the final as well, which is very good, I set the third fastest lap of the race, I kept my head cool and finally I grabbed 7th, but it’s been so great to be able to fight at the top all the way, that I can’t wait for the next round in Ortona.”