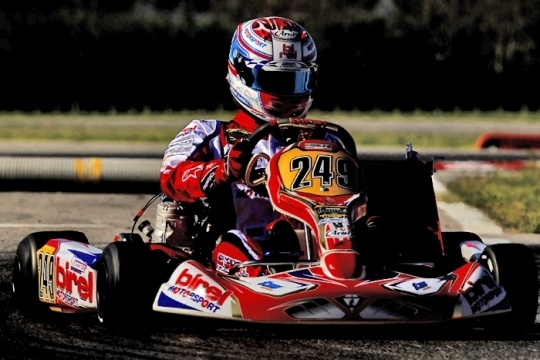 Alcaniz - Gabriel Aubry could have climbed upon the KFJ podium, instead his race finished with a contact at the end of lap 2 in the Final.  Birel Motorsport’s French driver, on the track with an evolution chassis successfully tested at the previous Euro Series competition in Genk, was one of the weekend’s protagonists right from qualification legs, plus a good 6th place secured in the Pre-Final.
But then in the Final, after a brilliant  5th position starting off, it was firstly a slight contact, and then a much harder one with  Sargeant, that relegated him back beyond 30th place, despite timing that would have allowed him to fight for victory, virtually putting an end to his race.  Bad luck for Mauricio Baiz as well, whose mistakes in qualification stage are probably ascribable to his little international experience. Yet, the Italian-Venezuelan started off really well in the Final and was swiftly regaining positions right before a contact forced him to quit.
The weekend was less troubled in KF for Russell, who was always in the top ten and had to slow down in the Final only because set up was not ideal. At any rate, the English driver finished in 8th position, gaining Championship points, just like   Bailly, who was the 15th to cross finish line.
No luck at all for Dane Rossel: a contact in Pre-Final lap 1 equalled forfeit after his clever qualification leg; finally, after doing well in the legs and constantly improving his performances and experience, Grzyb did not qualify by a hair. Russell’s, Rossel’s and Bailly’s evolution chassis reaffirmed their potential in KF class and, overall, the latest “step” proved brilliantly versatile, easily adapting to track conditions and maintaining steady performance.
The outcome of Birel’s weekend according to technical manager Mariano De Faveri: "Alcaniz track was confirmation of what we had already seen at the recent WSK race in Genk: the performances of our latest chassis are excellent and constant under any track condition, and this factor is really important when it comes to marketing our work on international markets, where performance and versatility are the key to the success of each product. Results wise, instead, it goes without saying that we are not satisfied, as Aubry deserved at least to secure essential points and, without all those mistakes, Baiz could have raced just like the French driver. In KF we are very close to our direct competitors, but something did not work as it should have done in the Final and we must understand why by analysing the race data."
For the record, the races were won by Lando Norris (KFJ) and Nielsen (KF), while the 2nd and final Euro KF appointment is scheduled in  Ortona, 2nd week in July.