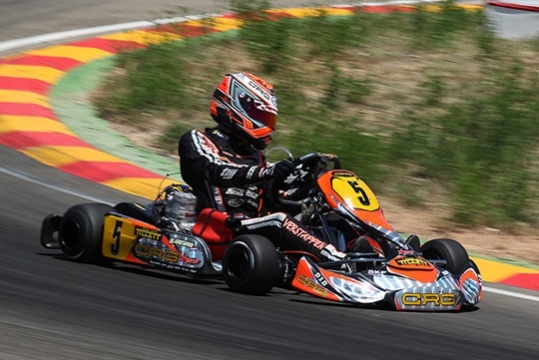 Press Release by: CRG
MAX VERSTAPPEN GETS THE THIRD PLACE AT THE END OF A SPECTACULAR FINAL. FELICE TIENE REGAINED 25 POSITIONS. JORDON LENNOX-LAMB FORCED TO THE RETIREMENT. ALEX PALOU GOOD 14TH . MARCU DIONISIOS 16TH IN KF JUNIOR.
Alcaniz (Spain). CRG obtained a good podium with Max Verstappen in the first round of the European CIK-FIA KF Championship that took place at the Motorland Aragon Circuit of Alcaniz. The Spanish weekend had the whole CRG works team as protagonist in a red-hot summer-start with air temperatures beyond 39 Celsius degrees on Sunday! The final result could have been even better for Verstappen though, who was racing with TM engine, as well as for Felice Tiene, also protagonist with CRG-Parilla on the Spanish track where he secured the fastest lap of the race at the end of a stunning recovery from 30th to final 5th.

VERSTAPPEN AND TIENE IN THE TITLE HUNT.  CRG's exit in Aragona has been very positive as all drivers have shown a very good level of competitiveness both in KF and KF Junior. The Italian squad currently has two drivers well placed in the European KF Championship with good chances in the title hunt.

Max Verstappen has been protagonist in the heats of Alcaniz and despite an incident he managed to get an easy win in his Pre-Final. In the Final he had a technical problem that made him lose some ground to the front-runners, the two Danish drivers Nielsen and Sorensen, but managed afterwards to recover all the way to challenge Sorensen for the second place in the finale.

While Verstappen proved to be one of the main protagonists of the top bunch, Felice Tiene completed the deed of recovering 25 positions -- from 30th all the way to the final 5th place. From what seen on track and certified by the clocks (he set the fastest lap), Tiene would have had concrete chances to get the win. Unfortunately, when holding the third position in the Pre-Final, he was hit by Barnicoat in an overtaking attempt that did not end well for Tiene nor for the British driver. Should Tiene have started the Final from the second row, we would have probably heard the Italian anthem on the podium.

LENNOX STOPPED BY THE CHAIN.  The other CRG's top driver, Jordon Lennox-Lamb racing on CRG-Bmb, showed good speed and great shape, but a technical problem to the chain of his kart did not allow him to complete that recovery started in the Final with a stunning getaway.

Solid 14th place for the home driver Alex Palou Montalbo instead, on CRG-Parilla; the Spaniard started from the last spot of the grid after a series of difficulties he had to face for the whole weekend.

In KF Junior the Romanian Marcu Dionisios (CRG-Bmb) ended 16th putting in a good recover in a weekend that started steep for the CRG driver. He showed anyway a good level of competitiveness and a performance growth.
Lando Norris, Matteo Raspatelli and Martijn Van Leeuwen completed the podium of KF Junior.

NEXT ROUND.  The second and last round of the KF and KF Junior European Championships is scheduled for next 21 July at Ortona's International Circuit of Abruzzo.

Euan Jeffery, team manager CRG: “Things could have worked out better for us, but in the end they did not go that bad after all. We scoredgood points in KF and we are within the title fight. The way Felice Tiene'sPre-Final ended was a pity as he has always been very quick. He run a good race anyway finishing fifth. Max Verstappen has been very fast as usual  but suffered a sudden thrust loss otherwise I believe he would have taken the first two drivers. Both our drivers are in good shape and they will have the chance to fight for the title in Ortona. Lennox unfortunately had a technical problem in the Final: he produced a stunning start but then had to retire. Alex Palou managed to qualify for the Final but experienced a troubled weekend. Marcu Dionisios run his second race with us in KF Junior and he his showing good adaptation and an interesting performance growth.”

Max Verstappen: “In the Final the start was not really perfect but I could stay on the outside and I came out in third.After the first couple of laps things got worse people with new tyres tried to pass me but later on, when the grip came back in the middle of the race it was quite good instead and I was catching the front runners. Then again I had aproblem to my kart and I lost almost a second but then there I was catchingthem again. In the last lap I could have probably overtaken the front runnersbut I did not want to take the risk to crash. The next race will be in Ortona, I have never been there but we still have good chances to get the title there. I'd like to thank CRG and all the people that helped me in this weekend starting from my dad".

Felice Tiene: “The Final would have been mine at 99%. In the race I was feeling really comfortable to get the win. In qualifying we were quick but then when we fitted new tyres we started struggling a bit. When you are forced to start from the back the danger of being involved in incidents is always higher. Unfortunately Barnicoat hit me in the Pre-Final and my chances dropped. I completed a great recover ending 5th and I am happy as I can still aim to win the championship.”

In the pictures: Max Verstappen flying to the third place in the European KF Championship on thefirst page and, below, on the podium in Alcaniz. In the following pages: Felice Tiene, fifth after a great recover from the 30th place and CRG drivers in Alcaniz: from the left hand side: Marcu Dionisios, Felice Tiene, Jordon Lennox-Lamb, Max Verstappen, Pedro Hiltbrand (LH Racing Team), Alex Palou Mantalbo.