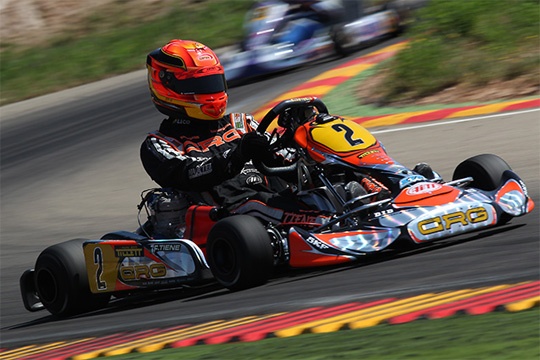 Press Release by: CRG
A BUMPING RUINED A VERY GOOD QUALIFYING TO MAX VERSTAPPEN, BUT HE IS EXPECTED TO COUNTER IN THE FINALS. VERY GOOD ALSO FELICE TIENE IN THE HEATS. START FROM THE BACK FOR JORDON LENNOX-LAMB AND ALEX PALOU, AS FOR MARCU DIONISIOS IN KF JUNIOR.
Alcaniz (Spain). After yet another false break this morning, the red-hot temperature of Aragona visited the Motorland of Alcaniz in Spain during the first of the two races of the European Championship reserved to the categories KF and KF Junior. Despite this additional difficulty that “melted” drivers and technicians, the programme of the Spanish weekend kept on going with tight rhythm and the infinite string of qualifying heats of Saturday defined the protagonists of the Finals scheduled for Sunday.

CRG, ALL DRIVERS TO COMPETE IN THE FINALS.  All CRG's “4 musketeers” competing in KF will take part in the finals but Max Verstappen (CRG-Tm) was quite unlucky as he was thrown in the air by a bumping at the start which ruined his race relegating him to start the Pre-Final of Sunday from the 11th position. Nothing is lost though, as the Dutch driver has wat it takes to get  the lead.  His scoreboard so far talks for itself: 2 wins, one 5th and a 24th place.

Very good performance for Felice Tiene (CRG-Parilla), who is making progress in his performance from free practice held at mid-week to the qualifying heats on Saturday. He will get the ninth spot of the Pre-Final starting grid (17th after the heats).

“The track is very nice – commented Felice Tiene at the end of Saturday's heats –  it is good fun to go through the many up and downs around the track. Today I improved quite a lot compared to free practice. The speed is there, let's now see how we start in the Pre-Final but we can go for it. The most difficult bit of the track? I'd say the long up-hill of about 250 meters, slipstreaming is quite important there as engine. Little by little we found the right solutions in terms of engine, the quality of CRG's chassis helps quite a lot”.

Jordon Lennox-Lamb (CRG-Bmb) proved to be a strong fighter also in Alcaniz but the British driver in force at CRG scored a quite penalyzing 33th place in the provisional ranking due to incidents and penalties he has been issued.
The fourth CRG works driver will start a bit more to the back, in fact the Catalan driver Alex Palou (CRG-Parilla), is currently 46th. He will start the Pre-Final from the 23rd position of the grid. Several incidents slowed down Marcu Dionisios (CRG-Bmb) in KF Junior and he therefore ended 48th absolute, with a fourth place obtained in the last heat of the day.