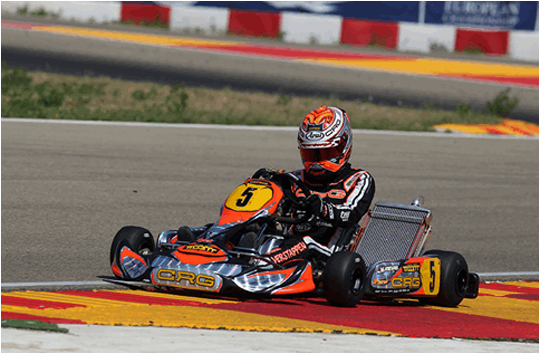 Press Release by: CRG
MAX VERSTAPPEN GETS THE WIN IN THE FIRST HEAT OF THE WEEKEND IN SPAIN. UNLUCKY START FOR THE OTHER CRG DRIVERS BUT THERE'S PLENTY OF TIME TO COUNTER IN SATURDAY'S HEATS.
Alcaniz (Spain). The first of the two rounds of the European CIK-FIA Championshipfor categories KF & KF Junior is underway on the spectacular up and downs of Alcaniz. The day of Friday as always has been devoted to free practice followed by qualifying with a further taste of racing with the first heats of the weekend. The first glimpse of summer hot made its appearance in Spain challenging even further people and karts.

FIRST HIT BY VERSTAPPEN.  Some mis-haps for some CRG color bearers were mitigated by the performance scored by the new WSK Euro Series KZ1champion Max Verstappen (CRG-Tm), who, after being 5th in qualifying obtained the first win in the only qualifying heat the Dutch driver took part in.

Things did not go that well for the others members of the "all blacks" team as they were struck by a bit of "mala suerte" with Jordon Lennox-Lamb (CRG-Bmb) and FeliceTiene (CRG-Parilla), having an accident at the start in the heat won by Verstappen.

In KF Junior bitter start for the Romanian Marcu Dionisios (CRG-Bmb), 25th qualifying and involved in an accident in the heat.

All in all CRG 's start was not ideal, exception made for Verstappen but there is still plenty of time to recover the lost grounding Saturday.

Max Verstappen commented his first acquaintance with the spectacular Motorland Aragon  of Alcaniz in this way: "So far this is the best track in the world to me. Qualifying did not start so well but we identified and solved a problem to the chassis and later on things were much better in the heats an we found a good speed."

TV COVERAGE. The Sunday races of the round of Alcaniz will be available through LIVE STREAMING next 16 June at www.cikfia.tv and www.cikfiachampionship.com. RAI  Sport will show a recording of the races instead.

CRG WORKS LLINEUP FOR THE EUROPEN KF&KFJ CHAMPIONSHIP ROUND OF ALCANIZ: