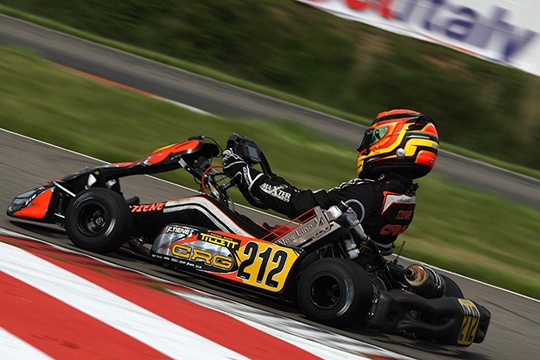 Press Release by: CRG
CRG WORKS TEAM WILL FIELD FELICE TIENE, MAX VERSTAPPEN, JORDON LENNOX-LAMB AND ALEX PALOU IN KF, MARCU DIONISIOS IN KF JUNIOR.
Lonato del Garda (Brescia). After the opening of theEuropean Championship of the categories KZ and KZ2 in  Wackersdorf this coming weekend the circuit of Motorland Aragon, Alcaniz, in Spain will house the European CIK-FIA Championship opener of the two categories KF and KF Junior.

A CHARGING SQUAD IN KF.  CRG works team is heading to the nice circuit of Aragona located in the north-west of Spain, between Barcelona and Madrid, with its drivers led by Felice Tiene, the 2012 KF2 World Champion and third in the European, who will be racing alongside two strong protagonists of last season as well as of this initial part of the campain, Max Verstappen and Jordon Lennox-Lamb.  The young home hero Alex Palou Montalbo will also be in the games in his debut year in the higher category.
LH Racing Team will also be racing in KF with the Spanish driver Pedro Hiltbrand and the Finns Johannes Heinonen and Jussi Kuusiniemi.

DIONISIOS IN KF JUNIOR.  The works team of CRG will lineup a new entry, Marcu Dionisios, in KF Junior. He is ready to counter-charge after the unlucky debut in the WSK Euro Series in Belgium where the Romanian driver did not manage to show his best due to a series of inconveniences.

Tyres supply will be the novelty in KF Junior as it will be given to the Italian constructor LeCont, while KF karts will fit Vega tyres instead.

Overall 155 drivers will be at the start of this Spanish round that is also the second CIK-FIA round organized and promoted in collaboration with WSK Promotion.

The second and last round of the European KF and KF Junior Championships will take place in Italy next July 21st at the International Circuit of Abruzzo in Ortona.

TV COVERAGE.  The races of the European Championship scheduled for next Sunday 16 June will be broadcast in LIVE STREAMING on the websites www.cikfia.tv and www.cikfiachampionship.com. RAI Sport will show the races recorded in Italy.