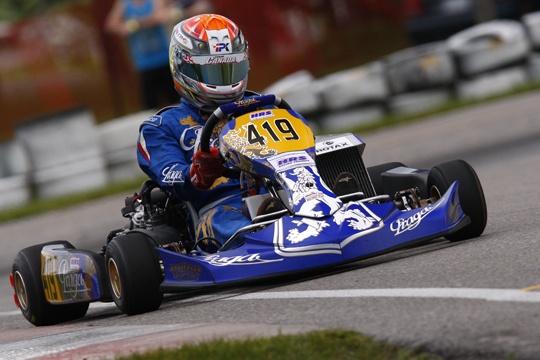 Press Release by: IPKarting
IPK North America had a very strong showing as the Eastern Canadian Karting Championship began a week ago as a combined squad sent seven different drivers from five different classes up the podium steps at Mosport International Karting.

Both Christopher Proietto and Xavier Harris were class winners, and IPK teams combined for five podiums in race one and four more a day later in race two.

“It was a great weekend for the team and a solid start to the ECKC season,” said Marco Di Leo, Team Manager of Goodwood Kartways/IPK, “The speed was rapid in all classes, but weather and breaks limited our success. The IPK product was great in both the wet and dry conditions though, and we really look forward to capitalizing in the next two races at Goodwood.”

With his own class leading off the race order, Di Leo himself set the tone for the team when he took Saturday pole position in Rotax DD2. The first podium of the Canadian season came later in day with third, and Proietto scored the first Praga win of the season in the second class up when his Praga Racing Ontario team gambled right with a tire call in changing conditions. Three more podiums followed on day one: Zachary Claman DeMelo in Rotax Senior, Matthew Barry in Rotax Junior, and lead man of IPK Quebec, Francis Mondou, in the final race of the day, DD2 Masters. Each was different on a day with consistently changing weather conditions, but it was Junior driver Marco Signoretti who caught the biggest break of the day – literally. After qualifying P15 and advancing to tenth in the prefinal, Signoretti had podium hopes of his own lining up for a wet final but it all went wrong at the start.

“As we all accelerated for the green flag a kart in front had some issues and didn't end up going anywhere,” Signoretti recalled. “I bumped him to get our outside line moving, but nothing really happened. Then I got rear-ended at a weird angle which spun me around and I was facing the field backwards trying to keep my steering wheel straight. It was just the worst feeling knowing there was nothing I could do. I knew it was going to end badly, and I was hit pretty well head on a bit to my left, just so that my tire acted like a ramp straight to my hand. It felt so surreal. I remember looking at the underside of the kart that hit me and I saw the chain spinning like it was slow motion. It didn't take long until pain set in.”

The pain was from a broken left hand, and the first broken bone ever experienced by Signoretti. Excruciating as anyone who has broken a bone knows, yet the junior driver had no question as to what his next move would be.

“I lifted my hand back to the steering wheel and I knew it was serious,” he continued. “I kept trying to convince myself it wasn't broken and I put no thought into retiring, my mind was set upon finishing the race. I didn't want to let my team down after they had worked so hard on my kart. Then the pain really kicked up a notch with about three to go. Every time I turned the wheel I felt bones clicking and really sharp pain. The last few laps were a struggle, but I got it home!”

A trip to hospital revealed the internal damage, and Signoretti now sports a cast, one that he'll keep for at least a month. Recuperation time is set at six to eight weeks, but in similar spirit to his drive, the driver doesn't necessarily see it as so. “I'll let it heal for six to eight weeks, but I'll drink my milk and hope to get back racing at Goodwood for races three and four!”

Another driver looking forward to the series resuming at Goodwood is rookie senior driver Tyler Kashak, who posted a pair of top fives in his senior debut.

“I was very happy with my results. Two top fives in such an experienced field was fantastic,” Kashak began. “Being able to compete in such a stacked group of drivers was very promising for me after making the jump into senior. The margin for error is reduced significantly in senior. In such a tight field, what seems like one driver overtaking you can quickly become a group and the next thing you know you've lost four positions. I was glad to find I could hold my ground out there and come out with two solid finishes.”

While the changing conditions were trying for some, things ran quite well for Kashak as he cut his racing teeth at Mosport and knew what he needed from the kart from one condition to the next. He now races with the Toronto Racing Association of Karters at Goodwood Kartways, so he is in strong position for the next two races in the series as well.

“With Mosport being my home track, the weather wasn't as much of a pain for us as it was to other drivers,” Kashak said. “It didn't take long to swap from wet to dry so many times and still be fast. Goodwood is another track I am beginning to get familiar with and I believe things can only get better. Being a TRAK member and having plenty of laps under my belt will ease some of the panic that comes when learning a new track. The time I've spent racing there in the past will make it easy for us to dial in the OK1 and show some pace at round two.”

Sunday was highlighted by another unexpected win, as on day two it was Xavier Harris who benefited from a tire gamble and scored a wet weather win in Rotax Micro-Max. Teammate Christopher Chanko made it an IPK one-two, and it would have been a sweep of the podium with Joshua Cunha on the blocks but for a questionable passing-under-yellow penalty amid torrential conditions during the race. Di Leo was also back on the podium Sunday finishing second in race number two.

The Eastern Canadian Karting Championship resumes June 28 at the home track of IPK North America – Goodwood Kartways. For more information on how IPK North America and its dealer network can assist you there, please contact: marco@goodwoodkartways.com