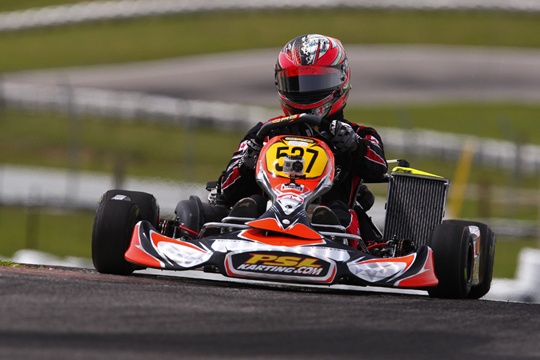 Press Release by: CRG
Heading to the first round of the 2013 Eastern Canadian Karting Championship (ECKC) this past weekend, Team PSL Karting would leave with three podium finishes as well as several top-ten results with their team of eight drivers.
Tackling some stiff competition and ever-changing weather conditions at the Mosport International Karting facility, part of the Canadian Tire Motorsport Park in Bowmanville, Ontario, PSL/CRGs would be represented in each Rotax division as the team began their bids for championship titles and invitations to the Rotax Max Challenge Grand Finals (RMCGF). “We were not expecting the weather we had this weekend,” explained Dominic Labrecque, President of PSL Karting. “For each session, it was a matter of following the radar and flipping a coin for tire selection. I think, as a team, we found the right solution for each track scenario.”
Leading the charge for Team PSL Karting was DD2 Masters frontrunner Luc Sauriol. Always a threat in the over-32 category, the multi-time Team Canada member and 2006 Rotax Masters World Champion would begin his quest for the championship title with two podium results. Qualifying fourth on Saturday, Sauriol had to fight for his third place podium finish in the day’s final after having to start from the tail of the field. Sunday would prove much the same for Sauriol, as a third place qualifying effort and another come from behind effort saw the title contender better to second place on the day. Fellow DD2 Masters pilot Francois Bellemare posted two additional top-tens results, placing fifth on Saturday and sixth for Sunday.
Rising talent Thierry Cote would be the lone PSL/CRG representative in the Mini Max field for the ECKC season opener. Battling at the front of the field all weekend, Cote would post a fourth place result on Saturday to start off his 2013 ECKC effort. Looking to better his result from the day prior, Cote did just that as he made a trip to the podium for his third place finish in the final.
Battling a deep field of Rotax Junior drivers, American Gavin Reichelt looked to give his Canadian competition a run for their money at Mosport. Placing ninth in qualifying on Saturday, Reichelt moved up to sixth in the prefinal. Bettering his result in the final, Reichelt claimed a top-five finish and posted the fastest lap of the race. Sunday saw the PSL newcomer just miss the podium with a fourth place effort in the day’s final as he increasingly becomes more comfortable with the PSL/CRG package.
Rotax DD2 pilot Francis Methot would add two top-ten results to Team PSL Karting’s tally, posting seventh place final results both days. Fellow DD2 driver Alessandro Bizzotto would recover from an 11th place finish on Sunday to better his teammate by one position on Sunday.


In the remaining Rotax classes, Micro Max driver William Chayer would post a top-ten finish on Saturday with his seventh place effort. Rotax Senior pilot and new PSL/CRG new recruit Marc Andre Levesque would come to grips with his new ride against a stout field of 29. Posting 14th overall on Saturday, Levesque bettered to 11th on Sunday and posted a ninth place result in the day’s prefinal. “For sure, it's obvious that our product is working - and working really well,” added PSL Karting Team Manager Andrew Campbell. “With a CRG product (LH/Karts & Parts) on the pole in Junior Max, there's no doubt the CRG is a great package. It's easy for people to say there are ten OTK products in the front, but what drivers/tuners forget is that there are also ten OTK products in the back.”
“We've got a big surprise for Goodwood, which will be great preparation for the Canadian Nationals. It's time to move forward and keep evolving our race program,” concluded Labrecque. Team PSL Karting will next take on ECKC action at the second doubleheader weekend on the schedule, June 28-30 at Goodwood Kartways in Stouffville, Ontario.
Team PSL Karting will be trackside in 2013 at the Rotax Pan American Challenge, the United States Rotax Grand Nationals, Eastern Canadian Karting Championship, Coupe de Quebec and the Canadian National Championships.
To learn more about the World's #1 CRG distributor, sales & service, arrive & drive opportunities, PSL racing engines or dealer opportunities, please visit www.pslkarting.com or www.pslkartingusa.com