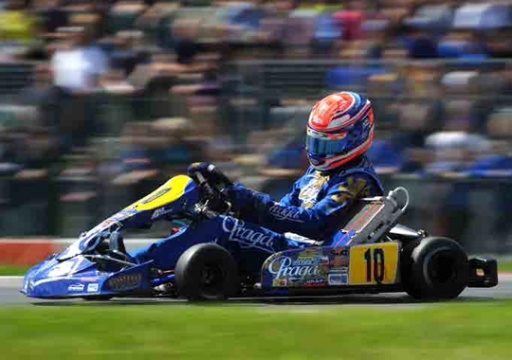 Press Release by: Praga Kart
The 2013 WSK Euro Series has come to a close with round four on the Genk circuit in Belgium. Praga Kart Racing takes the podium and closes in the top 10 in the KZ1

The fourth and last round of the 2013 WSK Euro Series took place on the Genk International Circuit, in Belgium. Praga Kart Racing was on track with a driver in each of the four categories.

In KZ1, Patrik Hajek was author of a spectacular weekend. 9th in the qualifyings, on Saturday in the first heat he was sent out by a contact on lap 6, but he rebounded immediately in the second race, climbing up nine positions (7th). In Final 1 he continued his ascent: 12th at the start and, one fast lap after another, 7th at the finish-line. Then on Sunday he really went wild and, after excellent heats (4th and 2nd), he closed Final 2 with a splendid and well deserved podium (3rd). At the end of the championship, Hajek and Praga Kart Racing are in the Top 10 (8th).

Praga was on track also in the KZ2 with Radim Maxa: strong, but hounded by bad luck. After Saturday’s heats the Czech driver was 4th overall, then in Final 1 he was sent out by a contact on lap 9 as he was up front. He kept his cool and Sunday in the heats charged up to 8th overall, but in Final 2 after a few laps he was again victim of a contact and forced to retire. Too bad, he had what it took to be one of the best. Bad luck also had its way with Karol Dabski in KF: 11th in his qualifying session and 3rd in his first heat, then in the second race, despite closing up front, he was penalized for a passing move and lost ground (16th). In the pre-final he thus started behind, then was immediately involved in an accident with multiple drivers that knocked him out: when the race resumed he was out of the games and in the Final he couldn’t get started. Determination and material are all there and the experience collected will surely help him do great in the future.