Author: Vroomkart International
In what is probably the most exciting news ever for a British karting series, Formula 1 supremo Bernie Ecclestone, along with Vodaphone Mercedes McLaren driver, world champion Lewis Hamilton and his father Anthony, have given their full support to the Stars of Tomorrow series. With immediate effect, the series is rebranded as "Formula Kart Stars" with a new website www.formulakartstars.com

"This is part Bernie and part a 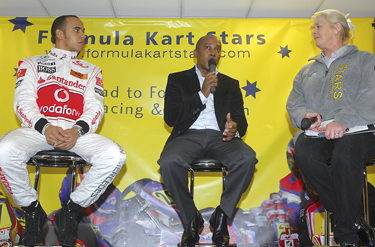 continuation of the existing name," explained Anthony Hamilton. Director of Stars Carolynn Hoy said at the press launch: "We met with Bernie a few days ago and he was incredibly supportive. Anthony really did fly the flag for me in Bernie's office."Ecclestone wants the series to support all the European Grand Prix meetings during 2010, with a mid week build up leading to kart racing on the Friday and Saturday evening, and expanding to all the GP's the following year. There will also be links to the Formula 1 website. The main theme for the series will be "The road to Formula 1 through racing and education," meaning that there will be a path supported by skills training not only for drivers, but mechanics, engineers and team managers. Hoy said she hoped scholarships would be part of the scheme. Anthony Hamilton expanded on this, saying: "I wanted Bernie to put some funding into the championship, initially to get some TV coverage, but it's moved on from there. With Lewis, myself and Bernie we hope to make this the premier championship, not just in the UK but throughout Europe. We're looking at having exchange students from other parts of the world." Ecclestone has promised his film crews on non-clashing dates. 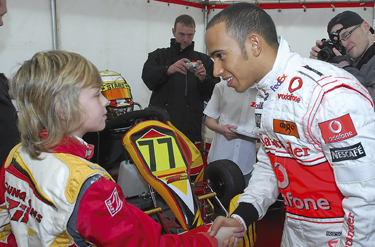 Both the Hamilton’s spent nearly three hours at the PF International kart circuit to support the launch. Lewis met the teams and drivers individually before going on stage for a Q&A session with interviewer Edward Hoy, joined by Anthony, and Carolynn Hoy. He started by saying: "I didn't realise just how small you guys are, but I just hope you continue with the dream you are chasing, because that's what I did." He had earlier met Roy Johnson, and was amazed to hear that this young driver had won all four major Cadet titles in the same year, a feat surpassing Hamilton's record. He went on to say that even he was a bit nervous meeting all the kart drivers today, it was a new experience for him, and he very much appreciated all the support that he was given and the positive energy he gets from it, also revealing that he will soon meet the Queen. He continued to give lots of good advice to the young drivers. This is how Lewis summed up his visit: "It was fantastic for me to have the opportunity to catch-up with the latest crop of Formula Kart Stars. It's really cool to see how determined and competitive they are, I can remember being exactly the same!" He added: "I enjoyed my time in the Championship massively and, more importantly, learnt a huge amount. This is the real grass roots of the sport, and gives kids an opportunity to compete and develop as a driver, and also to get a full understanding of the dedication that is required. Hopefully I gave them some good advice the most important of which is not to neglect their education in their drive to succeed in motorsport!"

Get the audio of the press conference here