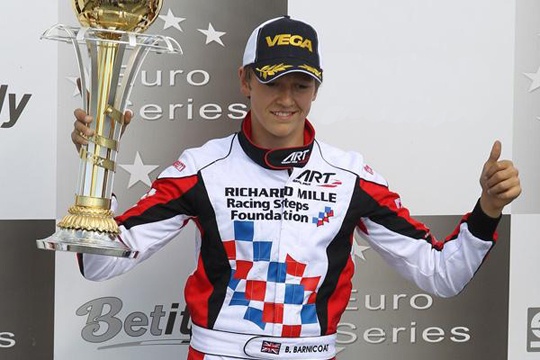 Press Release by: Art Grand Prix
The final round of the WSK Euro Series, held in Genk (B) on 1-2nd June, saw the ART Grand Prix factory drivers staunchly holding on to the championship podium after a fiercely contested weekend. The team managed by Armando Filini managed to bag one podium in the final and 2nd place overall with Ben Hanley in KZ1, and a podium in the final and 3rd place overall with Ben Barnicoat in KF.

In KZ1, the weekend started well for both Ben Hanley and Charles Leclerc, in search of more luck after the frustrating result at the European Championship few weeks before. With 3rd and 7th fastest lap respectively in qualifying, Ben and Charles were in the chase for valuable championship points in the final. In fact, thanks to two solid heats where he finished 5th and 6th, the Brit could take advantage of a 2nd row start in the final. Tougher outings for Leclerc, who had to recover from two contacts in the first heat finishing 11th - later advanced to 9th – and from near the back of the field after a chaotic heat 2 start, which would see him move up all the way to 10th for a 4th row final starting position.

Both ART Grand Prix drivers put in all they had in Final 1 grabbing 3rd and 5th right after the start and never relinquishing the position.

On Sunday, the first heat was a disaster for Hanley, out after only one lap while fighting for 2nd due to mechanical problem, while Leclerc marched on from 3rd position in the first 5 laps to close a safe 5th at the chequered flag.

Heat 2 would prove just as deceiving, this time for both ART Grand Prix drivers, with Hanley forced to start from the back of the field – where he would finish after a contact while in 13th – and Leclerc having to abandon the race on lap 7 while strongly in 4th place as a result of a scrap with Ardigò. Final 2 saw Hanley and Leclerc starting from 23rd and 11th respectively, Charles able to keep the position at the lights and Ben making a prodigious leap all the way to 14th. The two drivers would have opposite fate in the course of the race, Hanley making up four more positions by the chequered flag, and Leclerc slowed by a bad front tyre getting shuffled back and gobbled up at the rear.

All in all, both Hanley and Leclerc showed great pace and consistency, rewarded with enough points for the Brit to turn his provisional 2nd place in the standings into the vice-championship title.

In KF, Ben Barnicoat gave more reasons to celebrate to the ART Grand Prix camp. Despite stopping only the 14th fastest lap in qualifying and having a bad second heat – where he was running strongly in 3rd and dropped back with 3 laps to go due to a technical problem – the Brit managed to win one heat, take 3rd and 4th in the other two with the fastest lap to his credit to start the prefinal from 7th. But after a difficult first lap where he got shuffled back to 13th, Ben had to keep tight and try to limit the damage, managing to come home in 10th - later advanced to 8th. The final would be his masterpiece, jumping to 6th at the start and closing the first lap in 3rd place. And it was just a matter of few laps before Ben sneaked in to 2nd, which he never relinquished for the remaining 16 laps. A brilliant podium for the Brit, made more special by the overall 3rd place in the championship.

In KFJ, as many as eight drivers of ART Grand Prix Factory and satellite teams took on the grids in Genk. Best in qualifying was Haapalainen (27th fastest time), best after the heats was Bonduel (18th overall with three top-ten finishes), who proved himself also in prefinal and final grabbing 8th and 7th (from 16th on starting grid) respectively. Positive weekend also for Peltola, Borrelli and Piro, all making it to the final and closing 11th, 12th and 25th respectively. Shame for Sette Camara - in for a place in the final but out too early in the prefinal due to an ignition failure - and Xia, also showing signs of improvement.

“Despite everything, I’m honestly relieved. We’ve had too many issues in Genk, but we managed to overcome the difficulties bringing home two very important championship podiums. It hasn’t been easy, it’s only ART Grand Prix second season in the international karting scene, and the credit has to go the team, the drivers, mechanics and management. Our next goal is the European Championship, and we are going to test a new set of components in Alcaniz, which will help us take a further step forward.”

“It’s quite difficult to analyse the weekend. On Saturday we were on a roll, racing two consistent heats, and grabbing a strong podium. And thank God for that, because on Sunday the heats were a disaster, and I partially made up for it in the final. So, if it weren’t for Saturday’s podium, we would have had little to celebrate in the end. In KZ1 details make the difference, and we have to improve on this aspect because the pace is clearly there.”

"The prefinal was tough. We were on two old and two new tyres, which was a bit of a disadvantage to start with. Also I got pushed out wide onto the marbles in the second corner, which took me four or five laps to get rid of. Obviously that dropped me back but I had a good pace, which enabled me to make it back up to 10th. That was the case in the final as well. We'd taken the safe option with the carb settings to make sure that I finished in the points, and it paid off. On the basis of today's results I'd say we've turned the corner."