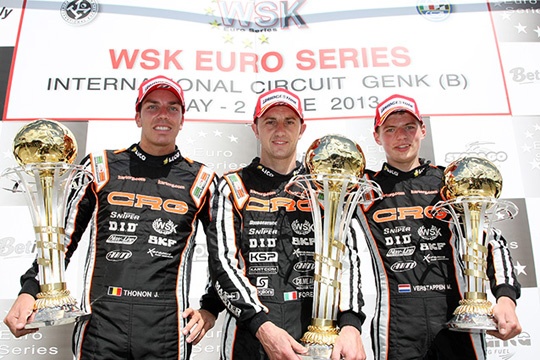 Press Release by: CRG
DAVIDE FORE’ GETS THE LAST KZ1 FINAL OF THE SEASON IN GENK IN A CRG TRIUMPH, WITH JONATHAN THONON GOOD SECOND. MAX VERSTAPPEN, WINNER OF THE FIRST FINAL, AS THE FRESH CHAMPION PRODUCED A STUNNING RECOVER IN RACE 2. TROUBLED WEEKEND FOR TIENE IN KF AND DIONISIOS IN KFJ.
Genk (Belgium). CRG showed on track an absolute dominion in Genk's last round of the WSK Euro Series in KZ1, which culminated in Final 1 victory – worth also the well deserved title for Max Verstappen – and in the solid one-two-three obtained in the second Final on Sunday with Davide Forè satisfactorily back on the top spot of the podium together with Jonathan Thonon and with the great protagonist Max Verstappen.

CRG drivers dominated the Belgian weekend highlighting once again the quality and competitiveness of the chassis produced by the Italian outfit, awarding the whole team with increased motivation for the remaining of the season that is about to get in the “red-hot” phase of the CIK-FIA championships.

FORE’ ON TOP IN KZ1.  After the spotless victory obtained by Max Verstappen (CRG-Tm) in Genk's first KZ1 Final on Saturday, which crowned him WSK Euro Series 2013 Champion, on Sunday honours were all for Davide Forè, who was racing with CRG colors for the Polish team DTK. The Italian driver on CRG-Tm prepared by Del Dosso, started from the front row and cruised to the victory since the beginning as his lead was never questioned after the initial laps of a racethat saw again Davide Forè under the spotlight and more competitive than ever.

CRG's dominion was completed by Jonathan Thonon, onCRG-Maxter prepared by Tec-Sav, who obtained a very good second place whilealso setting the fastest lap of the race on a circuit where he was crowned world champion for the fourth time in 2011. The Belgian driver managed to get the third place of the final standings, a result awarding his competitiveness and strong determination.

INCREDIBLE VERSTAPPEN. Max Verstappen deserves a special reference as he won the championship thanks to Saturday's Final win but then suffered an engine failure in the first heat on Sunday and therefore was forced to recover ground to the rivals in the second racing day. The exceptional shape of the young Dutch driver was confirmed in Sunday's Finalwhen he started from the 14th (!) place of the grid and later on recovered all the positions and joined the two colors-companions on top of the race. Unfortunately in one race phase Verstappen was bumped by a rival that partially bent his rear bump. Quite incredibly he tried to fix the problem while still in the race and managed to get rid of the piece of plastic touching is rear wheel.

Race direction waved the technical flag at Verstappen to call him back to the pits but withdrew it a lap later as the situation seem to be back to normal. After the truly deserved podium, following some complaints filed by the fourth classified (what one wouldn't do for a trophy...), Verstappen has been excluded by theclassification as his rear bumper at the end of the race did not comply with the original dimensions. Classification wise this was not a problem though, as the championship was already secured and Verstappen certainly put in an historic race no matter what.

PEX'S RECOVER. Good indications came also from the other CRG drivers racing in KZ1. Jorrit Pex, on track with team CRG Holland, produced a good recover from the back of the grid to the sixth final place. Pex ended fifth in the championship. Jordon Lennox-Lamb(CRG-Parilla), put in a good performance too as he crossed the finish line in seventh in Final-2 after a series of battles with his rivals. Fabian Federer (CRG-Modena) had some setup headaches and ended race-2 in 17th place instead. Five CRG drivers ended the championship within the top ten: 1. Verstappen, 3. Thonon, 5. Pex, 9. Forè, 10. Lennox.

TROUBLED WEEKEND FOR TIENE.  Quite tough weekend for CRG drivers racing in KF, with  Felice Tiene (CRG-Parilla) suffering several engine problems after an incident in one of Saturday's heats that fortunately did not leave physical consequences on the driver. Tiene kept on racing in the final phase but in the Pre-Final and in the Final he was unfortunately forced to an early retirement. That was a rial pity as he could have aimed to the top spots in the classification instead of finishing sixth. Alex Palou (CRG-Parilla) was penalized by 10 seconds in the Pre-Final. In the Final the Spanish driver recovered all the way to the 14th place showing once again a good adaptation to the higher category.
Good performance also for the other Spanish driver, Pedro Hiltbrand Aguilar, on LH-Tm belonging to team LH Racing, who obtained a very good second place in the Pre-Final.  A chassis setup modification in the Final turned out to be wrong and he ended the race in seventh place after an early lead in the initial stages.

DIONISIOS LOOKING AT THE EUROPEN CHAMPIONSHIP.  The first weekend with CRG in KF Junior for the strong Romanian driver Marcu Dionisios (CRG-Parilla) has been mean with satisfaction especially due to the fact that an electrical problem did not give him the chance to take part in qualifying. Dionisios' weekend was very complicated as he had to start from the back of the grid and ended in the Pre-Final. Dionisios will certainly have the chance to counter-charge in the next round of the European KF and KFJ Championships, with the first race scheduled in Alcaniz next June the 16th. The titles of the other categories went to Riccardo Negro (DR-Tm) in KZ2, to Dorian Boccolacci (Energy-Tm) in KF and to Lando Norris (FA Kart-Vortex) in KFJ.

SUNDAY QUOTES. Euan Jeffery, team manager CRG: “For the second year in a row we managed to bring home the KZ1 title in WSK Euro Series. This has not been a walk in the park as track conditions were not easy to handle with such changing weather and gave us some problems. The tarmac was quite slippery but at the end of the day we had an excellentresult with three CRG drivers on the podium. All our drivers were very quick, which makes us hopeful for the second round of the European Championship that will take place on this very same track in Genk at the end of June. In KF Felice Tiene and Alex Palou tried to recover the initial delay but Tiene had to retire in the Final due to a technical problem while Palou managed to put in a good string of quick laps after starting from the back. In KF Junior Marcu Dionisios was quite unlucky in this occasion as he could not take part in qualifying due to a problem to the spark plug: his weekend has been steep since then. In Belgium he showed good performance though, and we will certainly see his good potential in the coming European Championship at Alcaniz.”

Max Verstappen: “The season has been really great so far. In the beginning of this week it has been a little bit difficult to find a good balance but after qualifying we found a good setup and on Saturday I managed to win race and title achieving the target we set ourselves, which made me really happy. In Sunday's Final I had a good start but then I was waved thetechnical flag therefore I looked around and I saw that my rear bump was hitting the left rear tyre. I tried for four laps to get it out and then itsuddenly was out. At that point I kept pushing and pushing. I came back from fourteen to third: that's been great. Finally we got a disqualification as a rival filed a complaint on the final dimensions of my rear bump. This does not take anything away from my race and most of all does not affect the victory of the championship in any way”.

Davide Forè: “I am really happy for this race that gave me an incredible satisfaction. I would like to thank all my staff and CRG that allowed me to race with team DTK on TM engine prepared by Dal Dosso. I alsowould like to thank my mechanic that supported me in the best possible way.Everyone had faith in me and the result came. I am extremely happy.”

Jonathan Thonon: “I am happy as I obtained several positive results in this WSK Euro Series and thanks to the second place in the last Final I managed to reach the third place in the championship. It has been agreat day on a track where I have sweet memories on the KZ1 World Championship won in  2011. I would like to thank CRG, I am happy for the team that obtained a stunning result. A big thanks goes also to Tec-Sav and to my mechanic Miguel.”