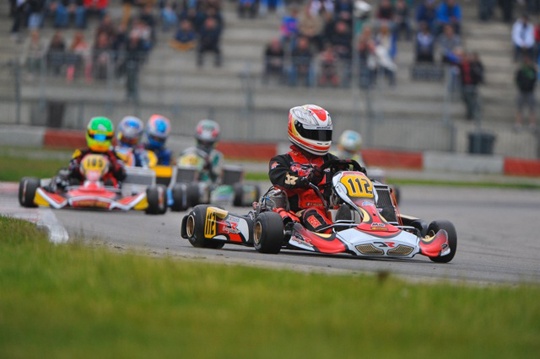 Author: Vroomkart International
The driver in force with Danilo Rossi’s team manages to overturn the KZ2 standings that saw Marco Zanchetta with a 33-point lead on the eve of WSK Euro Series final round.

The Belgian circuit of Genk played host to the fourth and final round of the WSK Euro Series, likely a preview of what will be seen in the decisive round of the CIK European Championship in late June.

Despite the championship standings are in favour of his season-long rival Marco Zanchetta, Negro exceeds expectation by grabbing the pole on Friday, then going on to win final 1 and lead the championship by 2 points following Zanchetta’s retirement due to mechanical failure.

Final 2 promises fireworks with Negro that starts from pole but gets overtaken by Johansson and his team mate Antonsen in tow, with Zanchetta catching up with the leading trio at the halfway mark. The last four laps see the two title contenders lap very similar times, with Zanchetta also stopping the fastest lap of the race but never actually finding the right opportunity to pass. Negro clings on to the podium and grabs the title, while Zanchetta will have to wait to the end of June to seek revenge.

In KZ1, the epilogue is almost predictable. Verstappen arrives in Genk with a wide margin in the championship over the second, and only an absolute debacle could see him beat for the title. Thankfully for the Dutch it doesn’t happen as he goes on to win final 1 after a tough battle with Marco Ardigò, who would have to defend from the British ART Grand Prix driver Ben Hanley in the final stages.

Final 2 is irrelevant to the title as it is already in the hands of Verstappen, but it is nevertheless extremely exciting. Davide Foré stands out against team mate Thonon, Ardigò is unable to make it on the podium again, taken by Hajek, while Verstappen gets disqualified after jumping on the podium due to a damaged bumper (disqualification irrelevant to the championship standings).

In KF, Boccolacci has a piece of the title in his pocket given the 71-point advantage over second after round 3. The French Energy team driver is anything but impressed by Nielsen’s three victories in the heats and goes on to win the pre-final ahead of Spaniard Hiltbrand. With the title now in his pocket, Boccolacci can be content with fourth place finish in the final, behind Nielsen, Barnicoat - the two completing the podium in the overall standings - and Russian Romanov.

In KFJ, English Lando Norris has a stress-free weekend having already won the title in the previous round. German driver Beckmann grabs the pole, as well as one of the two pre-finals (the other goes to Ahmed Enaam). The final is a close fight between Beckmann, Aubry and Thompson, who will close in that order. With his third place in the pre-final Alessio Lorandi manages to hang on to second place in the championship with 3 points lead over Beckmann.