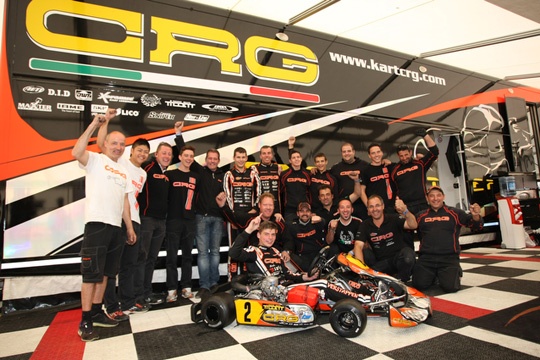 Press Release by: CRG
MAX VERSTAPPEN WON THE FIRST OF THE TWO FINALS IN BELGIUM AND SECURED EARLY THE TITLE. SCARY INCIDENT TO TIENE IN KF BUT THE ITALIAN SUFFERED ONLY AN ARM CONTUSION. ALL THE FINALS TO CLOSE GENK'S ROUND ON SUNDAY MORNING.
Genk (Belgium). The sought after sun rays eventually lit Genk for the fourth and last round of the WSK Euro Series that this weekend is going to crown in Belgium its champions. After some cold days, the first sun-ray arrived on Saturday afternoon to welcome Max Verstappen and CRG's victory in the first of the two Finals which secured the title in thehighest category, the KZ1, in a championship that will reach its conclusion on Sunday with the second Final.

VERSTAPPEN DOMINATES KZ1. It has been a great victory never questioned due to the supremacy shown on track by Max Verstappen throughout the season, despite his very young age – 15 years only. The youngster has been supported supported by the excellent and multiple-winner CRG chassis and by the very good TM engine unit prepared directly by the father, the former Formula One driver Jos Verstappen, who did not miss a single moment of such a happy race for his son and all CRG team.

The winning string of Max Verstappen in this WSK Euro Series 2013 started in Muro Leccese with a double victory in the two Finals during the season opener in the south of Italy, followed by another double win in Zuera, the stage of Spain's second round of the season.

A stop followed then in Sarno's third round, where some technical problems momentarily stalled the climb of the Dutch driver. Max Verstappen headed to Belgium's fourth and decisive round with a 60 points lead and closed the championship in his favour early, obtaining a solid win in the first of the two Finals which awarded him with the category title. The second Final scheduled for Sunday will therefore be a pure formality to him.

While the title is in Verstappen's hands, the others are still in contention for the honour spot. The main contenders to the third final place include also Jonathan Thonon (CRG-Maxter), very good fourth in the first Final on Saturday, right behind Verstappen, Ardigò and Hanley. The results of the other CRG protagonists follow: Davide Forè (CRG-Tm) ended eighth, Jorrit Pex (CRG-Tm) was ninth, while Fabian Federer (CRG-Modena) thirteenth. Incident for Jordon Lennox-Lamb, who had to quit the race.

APPREHENSION IN KF FOR TIENE'S INCIDENT. In KF Felice Tiene (CRG-Parilla) had an incident in one of the morning's heats which caused some apprehension due to the impact of the Italian driver with the safety barriers and a pole of thecircuit's cameras. Fortunately Tiene suffered only some bruises to the rightforearm which did not prevent the strong Italian to partake in the other races of the day.

The definitive result in KF, where CRG is competing with the Spanish Alex Palou, will be available only after the last heats scheduled for Sunday morning, as in the case of the category KF Junior where the Romanian driver Marcu Dionisios made his debut on CRG works team. The two pre-Finals scheduled for Sunday morning will name the finalists of the afternoon's conclusive race.

In KZ2 the first Final of Saturday saw the victory of Riccardo Negro (DR-Tm) whilechampionship leader Marco Zanchetta (Maranello-Tm) was forced to an early retirement due to the failure of the gears lever when he was holding the second place. The second Final on Sunday will be crucial for the title as Negro is now in the lead, two points clear of Zanchetta.

IN TV. WSK Euro Series Sunday races in Genk will be available through LIVE STREAMING on the website  www.wskarting.it. WSK TV Magazine will be broadcast on Friday 7 June on  Rai Sport.

All results are available at www.wskarting.it