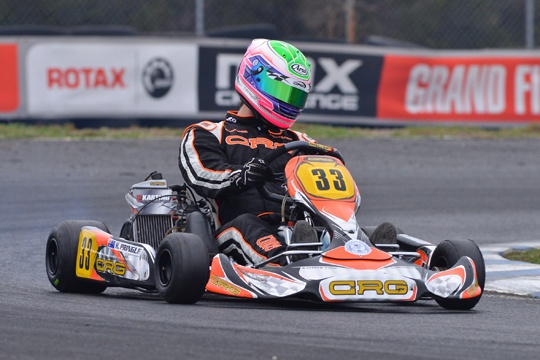 Press Release by: CRG
CRG Australia finished on top at the Rotax Pro Tour event in Geelong last weekend with Jason Pringle victorious in the DD2 category to claim the Jason Richards Cup.

Driving the CRG Dark Rider, Pringle was the driver to beat all throughout the weekend, as a result he greeted the chequered flag first in four of the five races contested at the event.

Pringle’s win ahead of last year’s Rotax Nationals winner in the category Lucas Ward and emerging star Michael Stewart ensured that he remained on top of the Rotax Rankings with three events remaining in the 2012/2013 cycle.

Joining Pringle on the podium for the CRG Australia team was his younger brother Rick, who finished second in the Rotax Heavy category aboard the CRG LH2 32/32 chassis.  He too is on top of the Rotax Rankings in his category as the pair set their sights on competing at the Rotax Max Challenge Grand Finals in New Orleans, USA later in the year.

While he may not have been able to claim his third successive victory in the category, Tyler Greenbury was again impressive his CRG LH1 30/30 chassis in the Rotax Light category.  The three-time Australian Champion charged to fourth in Geelong. Greenbury now sits an amazing fourth place in the Rotax Rankings considering he has only competed in three of the five points events.

“The results over the weekend at the Pro Tour are a continuation of the tireless efforts by everyone involved at CRG Australia,” said CRG Australia Managing Director Chris Dell. “To see both the Pringle boys on top of the Rotax Rankings in their respective categories is very pleasing and now Tyler is in contention to secure a place inside the top three in the rankings with three events remaining.”

The next event for the CRG Australia team will be round three of the Castrol EDGE CIK Stars of Karting Series at Geelong on June 15/16.