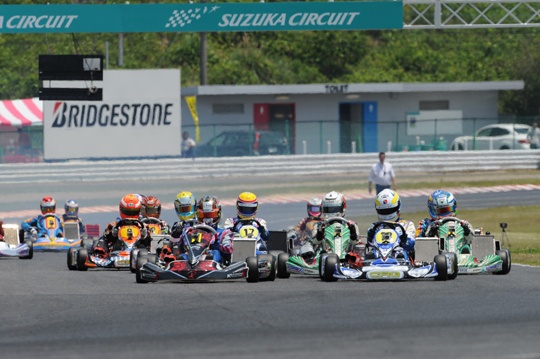 Press Release by: FIA Karting
Very pleasant weather bathed the first round of the Asia-Pacific KF Championship at Suzuka this weekend, an event under the auspices of the JAF (Japanese Automobile Federation), who were delighted to welcome a CIK-FIA meeting 50 years being created and becoming a member of the FIA as an ASN.

Even though the entry was not very substantial, the competition was at an interesting level due to the experience of the Asian drivers. The karting circuit at Suzuka again hosted this prestigious event.

Fong Wei Jie then won the qualifying heats clearly with Kiyohara and Saeki at his heels. Kasai was right behind the leader in the second heat for many laps, but was penalized 3'' for putting two wheels outside his lane too early at the start. However, we could see that he would able to fight for victory.

And this is what happened on Sunday morning in Race 1, in a long duel with Fong Wei Jie. Kasai quickly grabbed the lead, but his opponent would not let this stand and even reduced the deficit to 2 tenths of a second. Kasai responded to ensure his victory by 0.379'' ahead of Fong We Jie. Saeki caught up after a few delays at the start and finished third from Yuta Shiraishi (CRG-TM-B'stone) coming back from 15th in qualifying and 10th in the intermediate classification, setting the  fastest lap twice, then Jinya Yamakawa (Zanardi-TM-B'stone) was fifth.

In Race 2, everything happened at the start, when Kasai was unable to react as fast as he wanted. Some friction at the first corner proved the passion of the competitors but did not prevent Fong Wei Jie from giving the maximum to escape to victory without challenge. Steady in second place, Saeki could not disrupt the flow of the eventual winner. Third place was held by Kiyohara until halfway, but he retired and shortly after that Yamakawa finally secured the third step on the podium. Toshiki Oyu (Tony Kart-Vortex-B'stone) did well, recovering from 16th to 4th place ahead of Takeharu Nakamori (Kosmic-Vortex-B'stone). The unfortunate Kasai could not fight back and had to complete his ordeal in 13th position. The fastest lap was set successively by five drivers before Yuya Taira (Super-B'stone Winforce-Parilla) settled it during a good comeback from 17th to 7th place, which reflected the intensity of the battle.

Julien Fong Wei Jie, from Singapore, of course is in first place in the standings of the Asia-Pacific Championship with 45 points ahead of Arata Saeki (36 points) and Takashi Kasai (28 points). But the competition is far from over and the event in Macau in October will be even more crucial as only three of the four results will count towards the title.