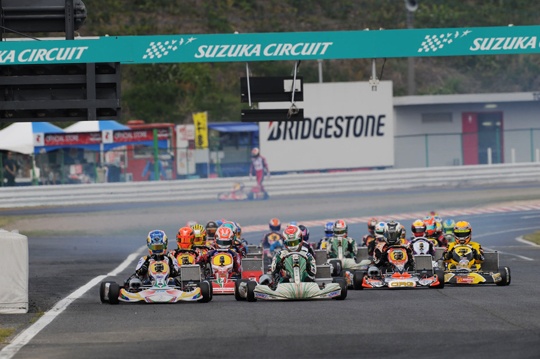 Press Release by: FIA Karting
The CIK-FIA Asia-Pacific Championships, a major international event of the 2013 season, will begin with the KF category, the headline of the meeting held next weekend at Suzuka (JAP) with an entry monopolized by the Japanese and Singaporean drivers.

As the President of the CIK-FIA, Shaikh Abdulla Bin Isa Al Khalifa, said recently, "The organization of major events in this part of the world has a long tradition and we want to continue our efforts so Karting continues to develop and take its rightful place."

Located in the heart of the Suzuka complex that hosts the Formula 1 Grand Prix, Japan's most famous kart circuit is widely appreciated for its fast paced layout and always leads to some great matchups. The Asia Pacific Championship has been held here for the karting hopefuls since 2003. This year the KF category brings twenty regulars plus KF1 and KF2 drivers, mainly from the Asian scene which looks very tough.

The Singapore driver Julien Fong Wei Jie (Tony Kart-TM-B'stone) under the colors of the British team Kartonix, will rely on his excellent burst of speed to fight against Ryota Kiyohara (CRG-TM-B'stone) who was seventh in 2012, both of whom competed in the KF2 World Cup last year at Zuera in Spain. Yuki Asahara (CRG-TM-B'stone) and Katsuhide Kaneisi (CRG-TM-B'stone) are back in the Asia Pacific Championship that they raced in last year along with Yuina Kobayashi (CRG-Vortex-B 'stone), while Tadasuke Makino (Super Winforce-TM-B'stone) has also experienced Rotax competition for several seasons. Jinya Yamakawa (Zanardi-TM-B'stone) was conspicuous in 2011 during the European KF3 qualifying at PF International and Toshiki Oyu (Tony Kart-Vortex-B'stone) in the Rok Cup.

Non-qualifying practice begins on Friday, May 24, and official timed practice is on Saturday, May 25 from 9:45. The two qualifying heats will be held in the afternoon and the finals, Race 1 and Race 2, will be on Sunday, May 25, 2013. The Championship will be awarded after adding up the points of these two races.