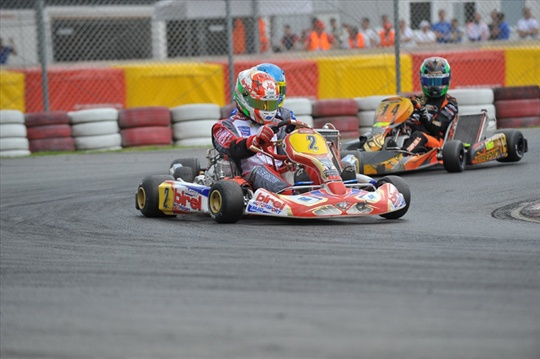 Press Release by: Birel Motorsport
Unlucky pre-finals for Birel: De Conto was involved in a contact in KZ while Midrla had motor trouble in KZ2
Wackersdorf (15-19 May) – Really disappointing outcome for Birel colours and drivers in KZ and KZ2 class at the 1st European Championship held in Wackersdorf. Loads of bad luck in the crucial stages of the race, especially for Paolo De Conto who, on the event’s eve, was expected to play a lead role among the “top” drivers in “top” class. As a matter of fact, after doing well in free and timed practice, the Veneto-born driver failed both qualification legs, achieving as little as 25th position on the Pre-Final grid. Same story for Roberto Toninelli, over the same “cursed” weekend with, believe it or not, 32nd place in penalty qualification. De Conto soon had to kiss all his recovery hopes goodbye due to a contact which firstly dragged him back, and later forced him to quit with a damaged radiator and tyre.
Whereas, Toninelli finished the race 16th, making his way up to mid classification. As regards Birel Group chassis, we must report the good pre-final performances by Kievitsbosch (RK) and Davies (First), respectively 13th and 14th on finish line. In the Final, following a great deal of overtaking, highly determined De Conto finally attained the same race pace as the leaders, securing 11th place in the wake of teammate Toninelli. For the record, the winner of the 1st KZ European Championship was Verstappen, followed by Lammers and Ardigò, who will hence be the main opponents at Genk’s 2nd and final continental appointment.

The German event was extremely unlucky for Jan Midrla in KZ2 as well: in fact, after excellent qualification legs with as many as 5 third places, it was technical breakdown that stopped the Birel Motorsport driver in Pre-Final lap 1. So the podium just vanished into thin air for the Czech, together with championship points. Still KZ2 wise, we must talk about positive  Kappis (Solgat Team, Birel-TM) and Paauwe (Paauwerkartracing Team, Birel-TM), who were 6th  and 7th in Pre-Final.
As regards Paawe, it must be highlighted that, in timed practice, he had been given 10" penalty for overtaking while the yellow flag was out, which equalled to being relegated in last place. Therefore his recovery is proof of his great competitiveness. Unfortunately, even for him, it was not a lucky Final (won by Negro), as a contact did not allow for anything better than 13th place. To finish, good weekend for Marconi, who secured 11th place and precious points with his First chassis. The 2nd and final KZ European Championship appointment is scheduled on 30 June in Genk.