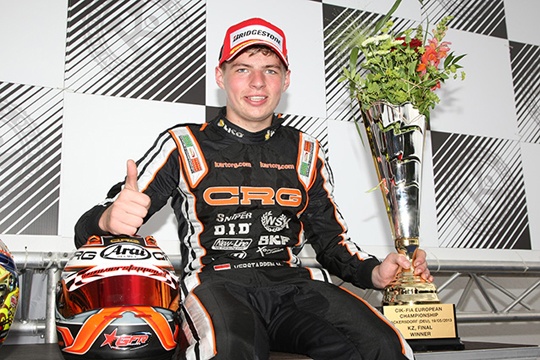 Press Release by: CRG Racing Team
THE CRG DRIVER MAX VERSTAPPEN, AS EXPECTED, WINS THE KZ FINAL IN THE FIRST ROUND OF THE EUROPEAN CHAMPIONSHIP. ALSO THE OTHER CRG DRIVERS BEHAVE WELL: LENNOX IS FIFTH, PEX SIXTH, FORE’ EIGHTH. THONON AND FEDERER OBLIGED TO RECOVER. IN KZ2 FELICE TIENE IS THE GREAT PROTAGONIST BUT HE GOT HIT FROM BEHIND AND HAD TO STOP.
Wackersdorf (Germany). Overwhelming victory for CRG in KZ with Max Verstappen in Wackersdorf in the first round of the CIK-FIA European championship. It was a weekend literally dominated by the Italian manufacturer which, thanks to his Dutch driver, won all in the top category. The competitors were no match for Verstappen, who achieved an impressive winning streak beginning with  the qualifying heats and finishing with the victories in the Pre-final and in the Final. He even set the fastest time in both the final races.

Verstappen's only weak point remains the start: it is not perfect yet, given that he is at his first year in the gearbox category, and also on the toboggan of Wackersdorf this lack of experience at the start was the only hope left for his competitors. However, after few laps the young and talented CRG driver pulled away, also thanks to a super chassis such as the Road Rebel KZ and to the TM engine prepared by a top technician like his father, the former F1 driver Jos Verstappen.

ALSO THE OTHER CRG DRIVERS TAKE CENTRE STAGE. If Max Verstappen was able to show his superiority without particular problems, in the Final CRG fell short of an achievement that seemed to be within the reach of the Italian team, especially after the "three of a kind" CRG laid on the table of qualifying with Pex, Verstappen and Forè, who set the three fastest times.

First of all, Jorrit Pex did not get what he deserved: he dominated - just like Verstappen -until the Pre-final; then, in the Final and after a good second place in the Pre-final, he had to be content with sixth place because of an issue with the grip of his tyres.

Jordon Lennox-Lamb, too, put in a superb performance on his CRG-Parilla. After a crash in the heats which pushed him back to19th place of the starting grid in the Pre-final, in this race he closed the gap and managed to finish 7th. In the Final, once again, he drove magnificently and finished fifth, right ahead of Pex. His recovery in the Pre-final was really outstanding, especially because it was achieved on thehard circuit of Wackersdorf: from the 19th position to the 7th! He deserved the podium of the Final.

Also DavideForè, of the DTK team, did not manage to step onto the podium. He started from the fourth slot on the grid of the Final, standing a good chance to achieve a good performance: unfortunately, he needed a slightly more powerful engine to do better than his final 8th place.

The German weekend seemed favourable also to Jonathan Thonon, on CRG-Maxter, but the dreams of the four-time world champion got shattered in the Pre-final when, together with his teammate Fabian Federer(CRG-Modena), crashed onto Ben Hanley, stuck with a seized engine. In the Final Thonon recovered many positions and finally placed 14th - despite a contact at the beginning of the race, setting the fourth fastest time. Federer finished 18th.

IN KZ2 TIENE IS SUPER AGAINST ALL ODDS. Another CRG driver who is getting used fast to the gearbox category is Felice Tiene, reigning world champion in KF2 and at his debut in KZ2: despite his lack of experience, he played a leading role in this first European event on his CRG-Maxter. Tiene'sweekend started well, with the sixth time in qualifying. Things went even better in the heats, where he won five times (even though one of the victories was revoked for a technical issue) and retired once after he got hit from behind at the first bend of the first lap.

Despite the two drawbacks of the heats, Tiene redeemed himself in his Pre-final, achieving a recovery who brought him from the 10th to the second place. He even set the fastest time of the race.

On the other hand, Tiene's Final was simply unbelievable; he had to stop for a issue with his rear bumper, the consequence of a contact at the beginning of the race, when he was in fourth position and ready for the final attack. A realshame for the Italian driver who could have achieved a much more prestigious result.

In KZ2 there was also Alex Palou, the runner-up of the KF3 European championship and of the champion of the WSK Euro Series. He, too, was at his debut in this category: the Spaniard used the weekend to get some experience in this category. Palou, on CRG-Maxter, nearly qualified for the Final after passing the heats. In the Pre-final Palou placed 19th, within a hair's breadth of the Final.

The KZ2 Final was won by Riccardo Negro (DR-Tm) ahead of Marco Zanchetta (Maranello-Tm). In the top-ten, the Dutch Dominik Schmidt, of CRG Holland on a CRG-Tm was fifth and the Croatian  Kristijan Habulin, of KK1 team on CRG-Modena, ninth.

NEXT APPOINTMENT. The second and last round of the KZ and KZ2 European Championship on 30th June in Genk (Belgium).

THE INTERVIEWS. Euan Jeffery, CRG team manager: “In KZ Max Verstappen was fantastic. His winning attitude is amazing as well as it is amazing how a 15-year-old guy like him can manage a race the way he does. However, we are happy for the performance of all our drivers: they were all very competitive. Unfortunately, Pex's tyres gotdirty with only one lap to go in the Final: he had some troubles when he tried to regain the ideal grip. Without this problem, we would have had another CRG driver on the podium, as we expected after the first results of the racing weekend. Good performances also from Forè and Lennox, as well as from Thonon and Federer, even though they got penalized by a start from the back rows of the starting grid. Also in KZ2 we had good results from the point of view of competitiveness, also thanks to the drivers of the private teams who ran with our equipment. We are sorry for what happened to Felice Tiene, stopped by a problem with the bumper which got stuck in the rear wheel after a contact in the Final. For Palou, this was the first real experience in KZ2, but he has learnt a lot.”

Max Verstappen, KZ: ”The Pre-final was good and the Final went even better. I was able to control the gap and to manage my tyres. A 24-lap Final is really long for the tyres, but I'm satisfied. The key to be so fast? Everything must be perfect: the chassis and the engine must be a perfect match. I'm sorry for what happened to Pex, he was unlucky. At the second lap there was a corner of the track which was really slippery. Both I and Pex risked to get off the track and he dropped back. It must have been disappointing for him, and I'm sorry for how things went. All the weekend was perfect for me. I have to say thank you to CRG, my father and TM engines. Next appointment of the European championship will be in Belgium, in Genk. For me that's the home circuit. We will see what we can do."