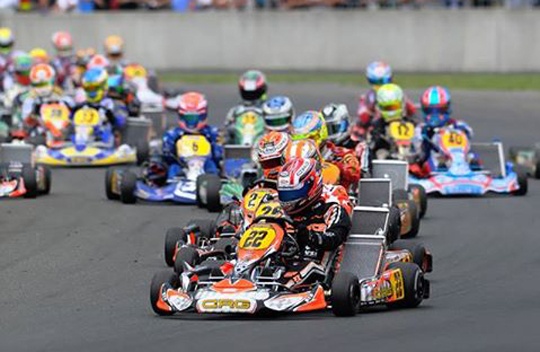 Press Release by: FIA Karting
After months of preparation, the first CIK-FIA meeting organized in collaboration with a promoter, WSK Promotion, was finally held this weekend in Germany at the Wackersdorf circuit.
Despite the inevitable pressure inherent in a new experience of this kind, the results of the opening round of the European Championship for KZ and KZ2 were overwhelmingly positive. Together with very pleasant weather, the event set a high standard, both for the competitors than and the organization. Max Verstappen will be remembered for his domination in KZ, while Riccardo Negro emerged victorious from a confrontation with the outstanding Marco Zanchetta in KZ2. Times change and Wackersdorf marks an important step towards the future of karting.

Although he had not meant it as a testimony, the spontaneous declaration of the great champion Bas Lammers on the podium could serve as a reference: "It really hasn't taken long for the collaboration between the CIK-FIA and WSK Promotion to bear fruit. We saw a lot of flexibility from the organization and a great respect for the competitors. Everyone was very attentive to everything going well, the commissioners were very involved, and concerned about the safety of all. The drivers felt good and the races took place in an excellent atmosphere."
The overall results are very encouraging for future collaborations between the CIK-FIA and WSK Promotion. Some perfectly understandable adjustments between the two organisations will be set up at the next round, but it is clear that the running of this first meeting has been very promising. The President of the CIK-FIA, the Vice-President and the Executive Secretary, who wanted to show their involvement in the new operation by their presence at Wackersdorf, were not disappointed that things went the way they hoped for the future of Karting.

Strict measures were taken on Friday in several areas, and the positive effects were clearly felt in the finals on Sunday. Noise reduction remains a priority of the CIK-FIA, including with the KZ equipment, so as not to jeopardize the future of the discipline, regardless of the level of competition. International Championships are to show the way so that all ASNs understand the importance of getting involved in this process. The checks carried out since the beginning of the meeting led to sanctions as announced from qualifying and the first heats. The CIK-FIA is very satisfied with the cooperation of major factories and teams that resulted, as on Saturday the noise levels complied with the regulations. In terms of sportsmanlike racing, the commissioners were able to effectively support the system established by the WSK Promotion cameras to remind drivers about bad behavior from the beginning of the event and to allow healthy competition in the finals. Finally, premature starters have also been actively pursued.
After this long but necessary preamble, here is the racing!

KZ: Verstappen wins every race
Although Jorrit Pex (CRG-TM-B'stone) was fastest during the qualifying session in KZ, Max Verstappen (CRG-TM-B'stone), second in qualifying, soon regained the ascendancy as the races began. Winning both heats, the pre-final and the final, where he set the fastest lap time, the young Dutch prodigy dominated Europe's leading meeting, making him the favorite for the title which will be awarded at the second round at Genk (Bel) in late June. Pex has long been his heir, but the battle redoubled it's intensity during the final and another Dutch driver, Bas Lammers (Intrepid-TM-B'stone) went on the attack early in the race to masterfully take second position. The Italian Marco Ardigo (Tony Kart-Vortex-B'stone) often found himself fighting with the French driver Anthony Abbasse (Sodi / TM-B 'stone), who was very fast at Wackersdorf. Ardigo finally took the third step of the podium, while Abbasse finished fourth, ahead of the Briton Jordon Lennox-Lamb (CRG-Parilla-B'stone) who made a good comeback.

KZ2: The duel with Zanchetta finally turns in favor of Negro
There have been many tenacious prospective winners in KZ2 who progressed through the perilous stages of the heats to receive good positions which were critical to get into the final via the pre-finals. The Italian Marco Zanchetta (Maranello-TM-B'stone) and German Riccardo Negro (DR-TM-B'stone) were already shoulder to shoulder in the intermediate classification, but were less successful in the pre-finals. They were able to sustain a long duel for 21 of the 24 laps of the final, but Negro retained a small advantage until the finish line. Winner of the second prefinal, the Swede Joel Johansson (Energy-TM-B'stone) was on the third step of the podium at Wackersdorf. There was no chance for the Italian Felice Tiene (CRG-Maxter-B'stone) who was demoted in the last heat for a mechanical non-compliance, came back to second place in the second prefinal and was forced to retire early in the final due to a missing bodywork part. Fourth position went to Norway's Emil Antonsen (DR-TM-B'stone) and fifth to the German Dominik Schmidt (CRG-TM-B'stone).