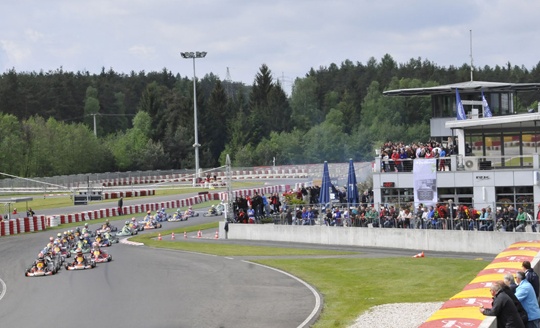 Press Release by: WSK
IN THE CIK-FIA KZ AND KZ2 EUROPEAN CHAMPIONSHIP OF WACKERSDORF (D) VERSTAPPEN (CRG-TM KZ), ZANCHETTA (MARANELLO-TM KZ2) AND NEGRO (DR-TM KZ2) GRAB THE POLE POSITIONS FOR TOMORROW'S PREFINALS, IN LIVE STREAMING ON www.cikfiachampionship.com and www.cikfia.tv
The CIK-FIA karting European championship is about to celebrate its first race winners in Wackersdorf (Germany), venue of the first round of the KZ and KZ2 championship. Tomorrow, on the Bavarian circuit, the final phase at the end of a long series of qualifying heats which took place today. 140 drivers coming from 22 different countries participated in today's races.

MAX VERSTAPPEN IS THE DRIVER TO BEAT IN KZ.
The Dutch Jorrit Pex (CRG-TM), reigning European champion, this year has found a tough rival: his fellow countryman Max Verstappen (CRG-TM). Verstappen, today, won in both the heats, responding to his teammate who set the fastest time in yesterday's qualifying. In tomorrow's pre-final, which is the first event of this category, we will see the two drivers in the front row, with Verstappen in pole position. Behind them the always consistent Marco Ardigò (Tony Kart-Vortex), who managed to get the second row after the excellent 4th time set yesterday. Next to the Italian driver there is the Belgian Jonathan Thonon (CRG-Maxter), who is going to try to attack seriously the first positions in tomorrow's race, pushed by the drivers immediately behind him in third row: the Italian Davide Forè (CRG-TM) and the Dutch Bas Lammers (Intrepid-TM), ready to join the battle for victory.

ZANCHETTA AND NEGRO IN POLE IN THE TWO KZ2 PRE-FINALS.
To get the best result possible in KZ2, the Italian Marco Zanchetta (Maranello-TM) had to win five heats given that his competitors were as motivated as him. In fact, Riccardo Negro (DR-TM), born in Italy but racing with a German license, finished his qualifying session winning four heats. So, the two drivers are the two polemen in the two Prefinals the 64 drivers of KZ2 will take part in tomorrow (32 drivers for each pre-final). After these two races, the 34 qualified drivers will enter the Final which is scheduled in the afternoon. Great results also for the Dutch Ricardo Romkema (Zanardi-TM) and the Norwegian Emil Antonsen (DR-TM), who managed to win and achieve good placings behind the two top drivers. Good placings also for the Swedish Douglas Lundberg (Maranello-TM) and the Italian Nicola Marcon (Tony Kart-Vortex), who follow in the current standings.

LIVE ON THE WEB AND RECAP ON RAI SPORT 2 FROM WACKERSDORF.
Tomorrow, broadcasting live in streaming on www.cikfia.tv and www.cikfiachampionship.com. On Tuesday 21st May the pre-recorded broadcasting on Rai Sport 2 at 18.55. Finally, on Friday 24th May and always on Rai Sport 2, the recap of the whole event in Germany.