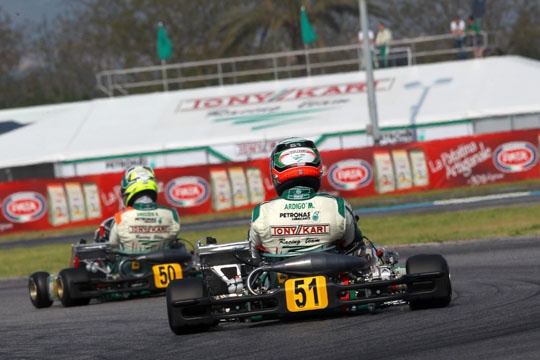 Press Release by: Tony Kart
On next Sunday the first round of the CIK European Championship for KZ category will be run at WACKERSDORF in Germany

- The Tony Kart Racing Team will lineup, Ardigò, Camponeschi, Torsellini and Dreezen in KZ1 class. Alessio Piccini in KZ2.
- Wackersdorf, seat of the latest two European Championships of KZ category, will see the fight among the best teams, drivers and manufacturers of the world
- In KZ2 category there are teams and drivers coming from all over Europe; they will aim at the success driving a Tony Kart-Vortex chassis
- Updates about the continental event will be available at the official CIK FIA website

KZ1 and KZ2 categories European Championship’s first round, out of two, will be run on next weekend at the German Wackersdorf track.
Our Racing Team will lineup the four drivers who have always been running in KZ1 category. They are the three Italian drivers Marco Ardigò, Flavio Camponeschi and Mirko Torsellini and the Belgian Rick Dreezen. The awaited event is the first CIK-FIA event of the season, in the category known everywhere for being the most inflamed category in the world karting scenario, KZ1.

In this world contest, offered by the engaging fight at Wackersdorf, the most famous chassis and engines manufactures of the world as well as the most experienced teams and drivers in the latest years will match against each others. Our team boasts drivers who gained several European titles, first of all Ardigò, twice World Champion, four times European Champion and several times winner in International competitions. Flavio Camponeschi as well, is the current World Champion of KF category and also owns an European title. Not less important are the professional careers of Rick Dreezen and Mirko Torsellini. Both drivers won high- level International competitions and are absolute leaders of the past CIK-FIA and WSK Championships.

The Circuit of Wackersdorf already host the two latest European Championships of KZ category (on single session) and on both occasions our drivers were leaders, even though they were finally unlucky. Our Racing Team, on last week, performed a two intense test-session days on the 1,222 meters of the long Wackersdorf track, with the aim of better define any detail, in view of such an important event.

At the drive of the Tony Kart-Vortex chassis there will be also the Finnish Henri Kokko, the Danish Andreas Fasberg, both with the Ward Racing team, and the Lithuanian Joey Hanssen.

In KZ2 we will have just one Tony Kart Racing Team driver, the Italian Alessio Piccini. The other driver running a Tony Kart-Vortex will be the Italian Gianmarco Ercoli and Nicola Marcon, the Belgian Adrien Brucculeri and Julian Becker, this last lined up by the KSM team together with the German driver Alexander Schmitz. Moreover the Dutch RyanVan Der Burgt, the French Maxime Roy, the Spanish Jorge Pescador and the two drivers of the team KSW-Racing Kevin Pieruszek and Rene Oswald.

The event will be live at the official website of the International Federation: http://www.cikfia.com/competitions/cik-calendar/2013/wackersdorf/kz/results.html
The event will start with the free practices on Friday morning. Qualifying will take place at 3.35pm.

Heats will begin on Saturday 18th of May. Finally, on Sunday 19th the prefinal at 12.30pm and the very final assigning the title at 3.15pm will be run.