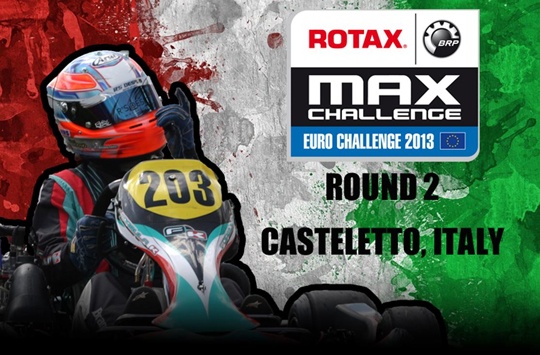 Press Release by: Rotax Euro Challenge
The countdown has started and there are only a few days left until the Rotax Max Euro Challenge goes for the second round of the year. From 20th to 26th of May 2013 Italy marks the next stop of the best European Rotax drivers.
All told about 170 participants subscribed for the upcoming event, which will take place on the karting circuit "7 Laghi" at Castelletto Di Branduzzo. As its name implies (seven lakes) the 1,256 metres long track is situated right within a lake district not too far away from Milan.

"Italy will be a very special venue for all of us. After Lonato 2006 and Busca 2009 the time is ripe to return to the sporting and economical home of kart racing. We are looking forward to taking back the Euro to Italy and it’s great to see so many Italian drivers joining us. Our comeback to Italy will welcome about 170 drivers, which is record breaking. We never had that many drivers for a second race in the Euro ever", says Roland Geidel, CEO of the organising RGMMC Establishment.

Having a look at the upcoming competition, the opening round winners surely want to to prove their performance again: With his triumph at Genk (BEL) Lando Norris (RL Racing Dept UK) is in favourite position in junior category, which applies to the reigning Rotax World Champion Charlie Eastwood (Strawberry Racing) in senior class. The flying Finn Miika Laiho (MPT Racing) is expected to confirm his win in DD2 category and last but not least Masters driver Florent Lambert (Tatum Racing) is aiming for a repetition of his success in Belgium.

Yet the favourites will not have a walkthrough. Karting manufacturer CRG announced its participation and sends its official factory drivers to Castelletto! The reigning KF2 World Cup champion Felice Tiene and his teammate Max Verstappen (KF2 World Cup Vice Champion) will rock the boat in senior category. In DD2 Jordan Lennox Lamb, last year's KZ2 World Cup Champion will take the challenge and represent the CRG colours.

But there are some more popular names, worth to be mentioned: Simas Juodvirsis (Energy Racing LT) from Lithuania took the title in DD2 class 2011 and underlined his skills 2012 by winning the European Championship and the famous SKUSA Super Nationals in KZ2. In Italy he will give his comeback in the Rotax Max Euro Challenge, aiming to tie in with his latest success. Finally karting legend Alessandro Manetti starts in the DD2 Masters on a Praga chassis for the team of Josh Hart Racing.

All told the ingredients promise a very exciting show at "7Laghi". Everybody is invited to join the race action, as live TV coverage will start on Friday and continue throughout the weekend. So stay tuned on the official website www.rotaxmaxeurochallenge.com, where you get all information regarding reports, photos, results and live TV stream.