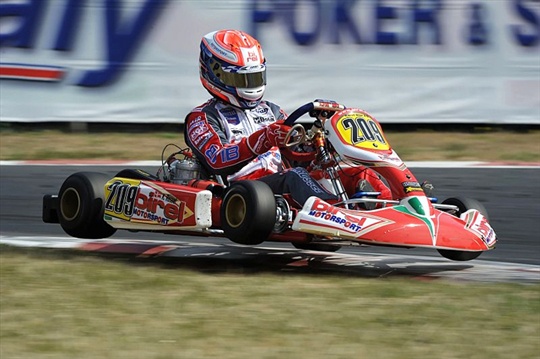 Press Release by: Birel Motorsport
The Danish driver, who already raced for Birel in 2011-2012, is back with the Lissone-based team with a biennial KF category agreement
Over the past days Birel management defined the details of the agreement that, starting next WSK Euro Series race, will see Kevin Rossel sporting Birel Motorsport suit once again.
The Danish driver, born in 1995, already raced the 2011 (RK) and 2012 season with Birel to then, from end of the last season on, experience two other different teams. Yet Birel Motorsport bond was not affected, and the willingness of both parties to resume collaboration brought them close once again, so close that testing was performed in Lonato over the last weeks.

From that moment on, negotiations for reaching an agreement were extremely simple and fast, to such an extent that Rossel will debut with Birel as early as at next WSK Euro Series appointment in Genk, before being on the track for the 1st European Championship competition in Spain.  Contract duration is two years plus participation in all the leading International races with TM motors by GKS Belgian tuner.

Ronni Sala, about the agreement: "Kevin is highly valued by the whole team and his potential is known, so we are pleased the right moment to have him back in our team in KF category has come.  Unfortunately it was a series of technical issues, and a couple misunderstandings, which induced us to terminate our biennial relationship last season. Over our meetings in the last weeks we perceived that Kevin, as well as his family who support him on the track, are willing to resume the relationship, enhancing it with the experience and the “path” followed by Kevin in the past months. Given such premise, we believe collaboration will be much more solid than in the past, enabling us to do an excellent job.”