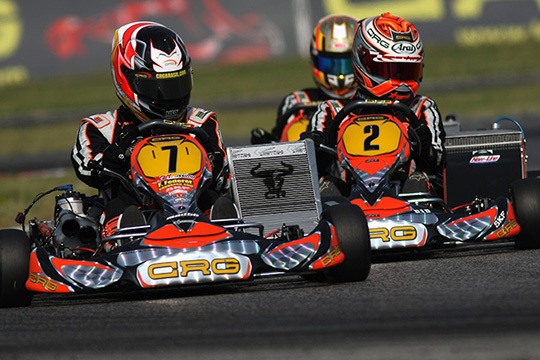 Press Release by: CRG
IN WACKERSDORF, IN GERMANY, THE OPENING EVENT OF THE CIK-FIA EUROPEAN CHAMPIONSHIP ORGANIZED BY WSK PROMOTION. CRG IS READY TO PLAY A LEADING ROLE WITH ALL ITS DRIVERS AIMING AT GETTING PRESTIGEOUS RESULTS FOR THE ITALIAN MANUFACTURER.
Lonato del Garda (Brescia - Italy). It is time for one of the most important events of the season: the first round of the KZ & KZ2 European Championship, on schedule this weekend on the Prokart Raceland Circuit of Wackersdorf inGermany. The event is organized, for the first time, by Luca De Donno's WSK Promotion. It is their first experience as promoter of a CIK-FIA event.

Newrules, this year, for the European championship. There are two rounds in calendar - the second round is in Belgium, in Genk, on 30th June - , and in  Wackersdorf, after the heats, there will be the KZ Pre-final and two Pre-finals for the KZ2. The two categories Finals, then, will award the score for the championship. The KZ European championship title (formerly KZ1) and KZ2 will be awarded to the drivers who will get the best score in the two finals. In Wackersdorf, there are 34 entrants to the KZ category and 103 to the KZ2.

CRG OFFICIAL TEAM IN KZ. CRG arrives in Germany with its official team at its best. In KZ there is the four-time world champion and two-time European champion Jonathan Thonon, on CRG-Maxter, together with the 2011 European champion Fabian Federer, on CRG-Modena, who won the KZ2 European title right in Wackersdorf.

Focus on other CRG drivers, such as the two skilful and talented drivers of the official team Max Verstappen, on CRG-Tm, at his first complete season in the top gearbox category and already among the best drivers, and Jordon Lennox-Lamb, on CRG-Parilla, reigning KZ2 world champion and ready to make his bid for victory in KZ.

Last but not least another hard-fighting young driver of the category: racing for the satellite team CRG Holland, Jorrit Pex, on CRG-Tm, current KZ1 European champion, a title heconquered last year right in Wackersdorf. He is also the current leader of the KZ2 German championship.Together with Pex, his teammate Sinan Van Der Raad.

Always in KZ, the five-time world champion David Forè on CRG-Tm will wear CRG colours too, even though he will race for the private team DTK Racing Team Poland.

CRG IN KZ2 WITH TIENE AND PALOU. In KZ2, CRG can boast the presence of two young stars, both on CRG-Maxter: Felice Tiene, ready to compete also in the gerabox category after winning the KF2 world title last year, and  Alex Palou, the KF3 title holder in the WSK Euro Series. This will be his first race in a KZ2 championship after some positive experiences in Spain.

On the whole, in KZ2, with the private teams drivers, there are 21 drivers racing on a CRG chassis, the 20% of the entrants. Those  are really outstandig figures which confirm how the Italian manufacturer chassis are among the most sought-after at international level, especially in the gearbox category, where no other manufacturer has ever won as many titles as CRG in the history of kart racing.

ON TV. Sunday 19th May the races of the European Championship in Wackersdorf will be aired LIVE in STREAMING on www.cikfia.com and on the new website dedicated to the CIK-FIA races  www.cikfiachampionship.com. On TV, pre-recorded broadcast on RAI Sport on 21st May from 21.00h.

CRG OFFICIAL TEAM AT THE KZ&KZ2 EUROPEAN CHAMPIONSHIP IN WACKERSDORF: