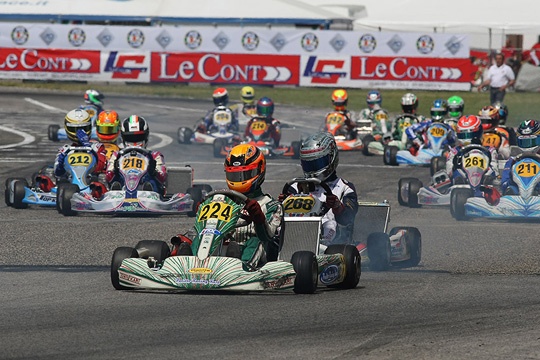 Press Release by: ACI-Csai
First Final in KZ2 goes to Di Poto but Pezzolla surprised everyone in race-2. In KF2 Iacovacci and Darras to the win, double victory of Pulcini in KF3. Pagano and Marseglia one victory each in 60 Mini.
Sarno (Salerno), 12th May 2013 – Good spectacle on track with about 150 drivers competing on the International Circuit Napoli of Sarno opened the first of the five rounds of the Italian CSAI Karting Championship with several protagonists on the rampage in the initial classifications of the Tricolored championships.

Particularly interesting were the double conclusive Finals in each of the 4 categories of this first round, with some surprise in the second Final that started with top eight grid inversion on the basis of race one'sstandings.

IN KZ2 VICTORY TO DI POTO AND PEZZOLLA. In KZ2 the driver from Salerno Luigi Di Poto (Rosso Corsa-Tm) with the assistance of Renda Engines to get on the top step of the podium of the first Final after winning qualifying and heats on Saturday; highly spectacular was also the charge to the first position moved by Federico Pezzolla (Intrepid-Tm) in the second Final as the Italian has been protagonist since its debut race.

Behind the surprising Di Poto the first Final podium was completed by Massimo Dante (Maranello-Tm) and Marco Pastacaldi (Birel Tm).

In the second Final Pezzolla produced an exciting recovery from the tenth place of the grid which ended with a stunning victory from Giuseppe Rendina (CKR-Tm) to Marco Pastacaldi (Birel-Tm) who repeated the third place obtained in race 1. In this second race Dante ended fourth, while Di Poto finished seventh basically keeping the starting position due to the grid inversion. Unfruitful weekend for 2012 champion Alessandro Giulietti (Intrepid-Tm) as he was fifth in final-1 and retired from final-2.

IN KF2 IACOVACCI AND DARRAS WINNING ONE EACH. In KF2 Finals Marco Moretti (Kosmic-Tm) did not repeat the very good performance set in the qualifying heats. In Final 1 FrancescoIacovacci (Tony kart-Tm) won the race with a completely International podium as second was the French Julien Darras while the Briton Callum Illot (Zanardi-Parilla) finished on the third step. Marco Moretti ended fourth ahead of Luca Corberi (Kosmic-Vortex) and Giulio Tommassin (Zanardi-Parilla).

In the second Finale the French Darras got the lead overtaking Tommassin who was leading the pack in the initial stages. In the fight for the podium Tommassin had the worst as he was involved in an accident when two laps remained, while Marco Maestranzi (Top Kart-Tm) ended a good recover in second position leading Corberi who inherited the third place from the incident involving Tommasin. Illot was fourth while Marco Moretti ended fourteenth due to a 10 seconds penalty.

PULCINI TWICE TO THE WIN IN KF3. In KF3 the usual Lorandi brothers "win-it-all" found a strong rival in Leonardo Pulcini (Tony Kart-Vortex), who was on the rampage since qualifying and the heats on Saturday. In the first Final Pulcini finished proceeding Alessio Lorandi (Tony Kart-Parilla) and the Russian Nikita Mazepin (Tony Kart-Vortex), with Leonardo Lorandi fourth and Remigio Garofano (Tonykart-Lke) good fifth.

In the second Finale Pulcini was again under the spotlight recovering all the way from the eighth place due to the grid inversion to the lead. Alessio Lorandi was second again with Danilo Albanese (Kosmic-Vortex)third after finishing race one in 13th place. Fourth was Leonardo Lorandi as the latter is now at ease in this category after last year run in 60 Mini. The Dutch Martin Van Leeuwen (Zanardi-Parilla), fifth, was the best of the several foreign drivers.

60 MINI WON BY PAGANO AND MARSEGLIA. In the quite crowded category of the youngest drivers, the 60 Mini, the two finals were won by Francesco Pagano and Leonardo Marseglia, both on Top Kart-Parilla with the two already shining in qualifying and heats. Missing from the Finals was "Keed" as he was excluded by the race by Stewards at the end of Saturday's heats.

CORRIERE DELLO SPORT, WEDNESDAY 15 MAY. A special page on the Italian CSAI Karting Championship race of Sarno will be published Wednesday 15 May on the sport magazine Corriere dello Sport, with commentary, classifications and pictures from the race track.

All results, live timing, commentary and pictures of the races will be available through the website www.acisportitalia.it 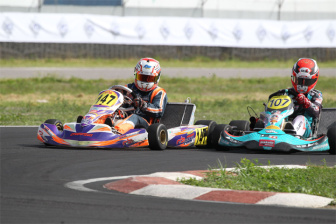 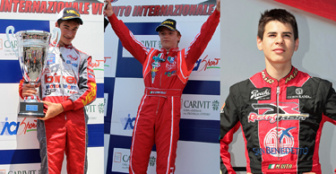