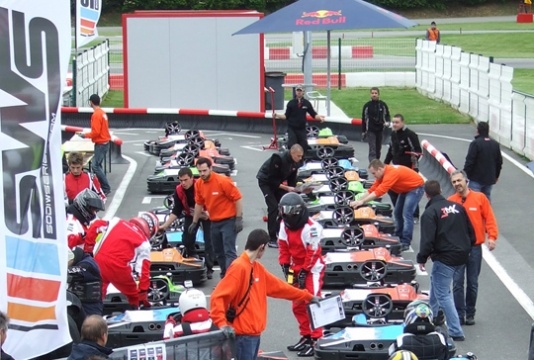 Author: Vroomkart International
The first day of the Sodi World Series is in full swing on the track of Cormeilles in Paris. The cold weather is not yet yielding to the rain, which is expected, however, for the start of Endurance, this evening at 9.30.
by D.Leone

At the end of the morning session, the Junior category had the winner of the first of four races. On the track, drivers from Russia, England, Belgium, Bulgaria, the United Arab Emirates and of course France were the protagonists. Among all, Ilja Tsepkalo of the Mayak Club from Russia prevailed in the 12 lap race starting from the second row and leaving behind the Englishman Andrew Graham (Buckmore Park) and French Erwann Varlet (GP Circuit).

In the Sprint category, Swiss  Pascal Saurer took the pole over the 76 drivers present in the class, which by regulation can not participate in the Endurance. Local driver Sébastien Fournet (Racing Kart de Cormeilles) was second ahead of fellow countryman Maxime Jaquemin (Circuit of Essay). Then Alessio Lucchesi of Kartodromo Città di Messina was the first of the Italians, this club fielding eight drivers. Worthy of note over the Arab drivers from Dubai and Bahrain, the Americans from Caslpeed Karting Center, as well as those from Belgium, Germany, Bulgaria and Spain.