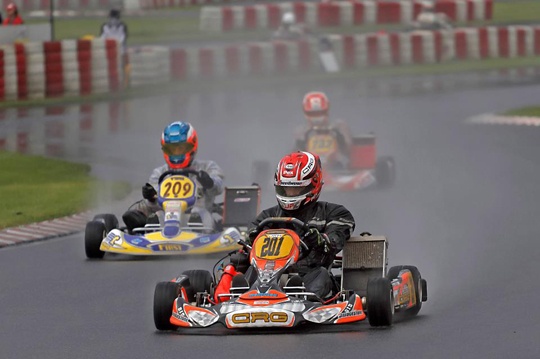 Press Release by: CRG
THANKS TO A SECOND PLACE IN FINAL 2 WHICH ALLOWED HIM TO GET FULL POINTS, JORRIT PEX CONFIRMS HIS LEADERSHIP IN THE GERMAN CHAMPIONSHIP. DAVIDE FORE’ GOT HIT BY A PENALTY FOR ARRIVING LATE ON THE STARTING GRID. HE SHOULD HAVE STARTED FROM THE FRONT ROW.
Lonato del Garda (Brescia - Italy). Another great performance for CRG and Jorrit Pex in the DKM (the German Championship) last Sunday. In the second round run in Wackersdorf, The CRG Holland driver arrived second, position which awarded him full points and the leadership in the championship with a remarkable lead.

PEX LEADERSHIP GETS STEADIER. After setting the overall second fastest time in qualifying, just 25 milliseconds behind the French Abbasse, Jorrit Pex managed to finish sixth in Final 1, despite a contact with another driver during the first lap tussle. But it was in the second Final that Pex performed at his best: he achieved a crucial second place which awarded him 25 points for the championship, given that Abbasse, the winner, is not taking part in the championship.

Thanks to his double win in the last race of Ampfing and the two placings in Wackersdorf, Pex is now leading the championship with a 47 lead over his closest pursuer, his fellow countryman Romkema.

FORE’ BETRAYED BY A TYRE CHANGE.  On the other hand, Davide Forè - who put in a good performance in the first round of Ampfig -, racing in Wackersdorf with the Polish team DTK, was dogged by bad luck. The Italian driver did well in the first phase of this second round, setting a remarkable time in qualifying - third, just 13milliseconds slower than Pex -, and winning one of the three heats on Saturday - a heat won under heavy rain.

In the first Final Forè should have started from the front row, but he tried to change the tyres few minutes before the start and arrived on the starting grid with a 15 second delay. This delay cost him a penalty and he had to start from thelast slot.

Davide Forè arrived 22nd in the first final. In final 2 he was eighth when he got involved in an accident while trying to pass another driver. His race finished with five laps remaining.

NEXT APPOINTMENTS.
Next appointments of the German Championship: 14th July Kerpen, 18th August Hahn and 13th October Genk in Belgium.

All the results on www.kart-dm.de/startseite/