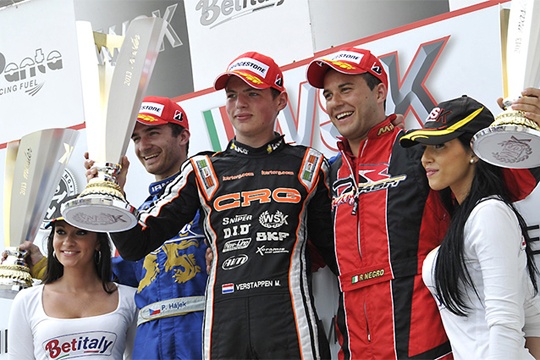 Press Release by: CRG
ANOTHER GREAT PERFORMANCE FOR MAX VERSTAPPEN. IN THE WSK MASTER SERIES, WITH ONLY ONE ROUND REMAINING, THE DUTCH DRIVER HAS NOW A 77 POINT LEAD OVER HIS PURSUERS.
IN KF FUMA HORIO WAS STOPPED BY AN ACCIDENT. IN THE 60 MINI THE GAMOTO TEAM OCCUPIES THE FIRST THREE STEPS OF THE PODIUM, MARTINEZ IS THE WINNER.

MaxVerstappen, on CRG-Tm, confirms his leadership in the WSK Master Series KZ2category thanks to another terrific win achieved in Final 2 in the third round of the series in Precenicco (Italy).
TheDutch driver is now very close to the championship: he has a 77 point lead with only 85 points to be assigned in the final round of Castelletto di Branduzzo on 14th July.

VERSTAPPEN DOMINATES IN KZ2. Max Verstappen and CRG outpaced their rival in the third round of the WSK Master Series in Precenicco
since qualifying. Here, the young Dutch driver got the pole-position hands down, on a track he had never seen before.

His positive trend continued in the two qualifying heats on Saturday, where he won twice. Only for a tyre issue he couldn't win Final 1, where he had to be content with the second place behind Hajek.

Thanks to the second place achieved onSaturday and his victory on Sunday, Verstappen's lead over his competitors  has widened: Negro is 77 points behind, Hayek 78.

The WSK Master Series race gave Verstappen another good reason to optimist in view of his main target: the forthcoming KZ European Champion to be held in Wackersdorf in two weeks' time.

Good results also for the private team KK1 with its driver, the Croatian Kristijan Habulin, who ran on a CRG-Modena. He placed fifth in the First final and sixth in Final 2.

IN KF HORIO GOT STOPPED BY AN ACCIDENT. In KF,  the Japanese Fuma Horio on CRG-Bmb got stopped by an accident in the Final. It is a shame, because there were good expectations after his performance during qualifying. Horio, in fact, managed to enter the Superpole for the first time thanks to his 11th place. Then, he had a series of minor issues which culminated with the accident in the Final that prevented him from taking centre stage. On the other hand, the top ten was achieved by the Polish Igor Walilko (7th) - on a CRG-Tm of the Forza Racing team - and the Danish Kevin Rossel (8th) of the LH Racing team.

MARTINEZ'S BID FOR THE TITLE OF THE 60 MINI. Gamoto achieved the first three places of the 60 Mini podium with its three top drivers: Eliseo Martinez, Kostantinos and Muizzuddin Abdul Gafar, all on CRG-Lke.

They stepped, in this order, on the podium of the Final after arriving in the same order in the Pre-final too. Thanks to this result, Eliseo Martinez, who had already won the WSK Euro Series championship last week, is the leader in this championship too with a 42 point lead with one round to go.

In this third round of the WSK Master Series, the other categories were won by Alessio Lorandi (KF Junior) - who won the category championship too with still one round to go - and by Dorian Boccolacci (KF).

NEXT EVENT. The next and last event of the WSK Master Series is on the 7 Laghi Circuit in Castelletto di Branduzzo (Pavia - Italy) on 14th July.