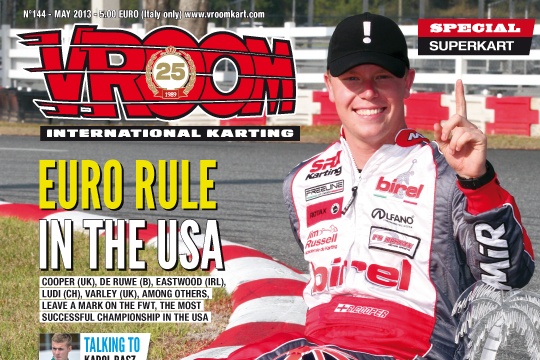 Author: Vroomkart International
Racing, racing and more racing. We bring you the reports of the major karting events in the world, three exclusive technical articles including the BRM track test, interviews to the protagonists from the track, a focus on Superkart, Vintage karts from the USA and a lot more.

TRACK TEST – BRM GPM66 / TM KZ10B
Like some railway stations, one of the latest characteristics of BRM characteristics is to vary “wheelbase” distance between the bearings on the axle. But, to be honest, we are talking about karts, which are already well balanced when they are put onto a circuit “out of the box”, brand new, as we noticed when in Ottobiano we tested the 3-gear model made with 32 mm tubes and powered by TM.

SPECIAL – Mechatron Kart
After testing Mechatron ME-Shifter F1 gear-shift system back in 2008, we returned to the Frankfurt-based German factory to see how this incredible piece of equipment has evolved. ME-Shifter F1 designer Paul Gross talked us through the major improvements.

RACE REPORT – Rotax Euro Challenge Rnd.1
The Rotax Euro Challenge kicked off its 2013 racing season on the 1,360 metres long track of Genk (B) over the Easter weekend. More than 200 drivers from all over the world (35 countries represented) found Europe’s unforgiving winter weather hard to deal with, soon turning into hot-racing mode for the pleasure of the crowds.

RACE REPORT – Florida Winter Tour Rotax Series Rnd.6
The final day of the 2013 Florida Winter Tour is in the books as series hit the track at Ocala Gran Prix under a wide mixture of weather, including very heavy winds and even an intense downpour, and heated action on track. Seven class champions were crowned, with six tickets awarded to the Rotax Grand Finals, held this November in New Orleans, USA.

RACE REPORT – Superkart French Open / German Series Rnd.1
For the second consecutive year, both the French and German Championships kicked off in Hockenheim. The races, valid for both championships, were held in conjunction fielding more than 50 drivers representing 11 different countries.

TALKING TO – Enea Brenna - TBkart
Here we are chatting to Enea Brenna, talking about the present and the future of TBkart, he is a manufacturer that looks also to the future, especially through the manufacturing of rental type karts and who defends the “made in Italy” with high quality products.

TALKING TO – Max Verstappen
Sure he’s still only 15, he’s yet to grab a major CIK title – though he’s been a top contender of the past three years – but Max Verstappen has started the 2013 season in superb fashion, taking a dominant win at the Lonato Winter Cup and proving nigh unbeatable in the WSK Euro Series first three rounds. Is this going to be the right year for the fast Dutch star?

TALKING TO – Karol Basz
One of the best Polish drivers, Karol Basz, who this year steps into Robazzi’s court, Tony Kart patron and who is stirring much interest in the field of international karting.

SPECIAL – Superkart
Imagine sitting two centimetres from the asphalt on a beautiful day in spring. Only you aren’t on your kart, but on a small “monster” with three times as much power, capable of passing from 0 to 100 km/h in less than three seconds, that can reach 250 km/h and weighs just 30% more than a normal kart. Well, vehicles like this do exist: they are called Superkarts.

THINGS TO KNOW – About Locknuts
A column on things that are “obvious but not too much” about karting.

VROOM VINTAGE USA – 9th annual VKA reunion
Almost three hundred Americans and eight Australians all with a major interest in vintage karting gathered at the Adams Kart Track located on the outskirts of Riverside California for the 9th annual Vintage Kart Reunion and the second race meeting of the 2013 Vintage Karting Association season. One hundred and seventeen karts signed on. 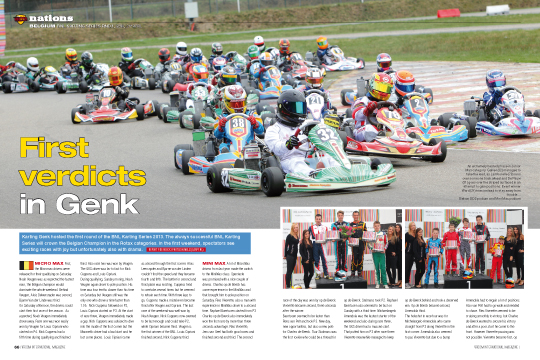 NATIONAL RACES
Well into the 2013 racing season, we feature the opening rounds of the Belgian BNL Karting Series, the Danish Rotax Challenge, and the German DKM Championship. Plus, a new initiative dedicated to new talents in Poland, the Australian Nationals and the National Sprint Championships from New Zealand. 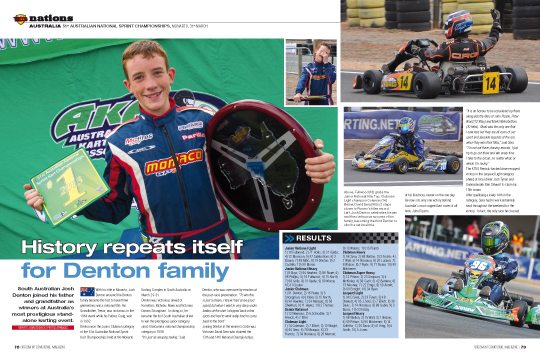 COLUMNS – Mondokart, VroomMama, June National and International racing calendar
The CIK recently announced some changes for the current season, mainly the cancellation of the Karting Talent Trophy, as well as a new General Secretary, and extended entry for the Asia/Pacific championship. Also, the UK has replaced the KF2 national championship with KZ category; a local initiative for newcomers has seen the introduction of Junior Tyro low cost category. Following the increasing success of vintage karts, Australia is going to organize the Vintage Kart Prix International in 2014. The Rock Island Grand Prix has set the class line up for the 2013 edition. RKS presents its new features.
In VroomMama, the column dedicated to our younger readers, we talk about an interesting read for our sport.
The National and International racing calendar of June features 39 national events in 17 countries, as well as 5 major international races.