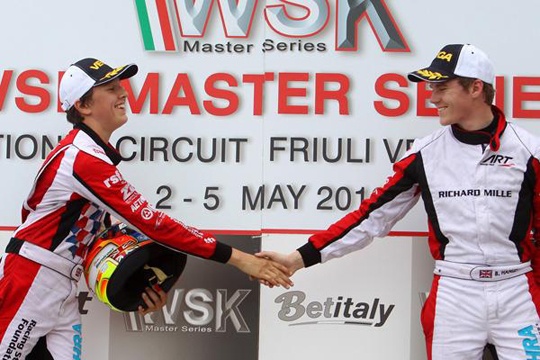 Press Release by: Art Grand Prix
Weekend of hard work for ART Grand Prix at the 3rd round of the WSK Master Series, held in Precenicco (I) on 4-5th May.
New chassis and engine parts have been put to test by Ben Hanley, exceptionally racing in KF for the first time this season.

In KZ2 in fact Charles Leclerc was the only driver to represent the ART Grand Prix Factory Team. And the young driver showed off great form by stopping 3rd fastest time in qualifying on Saturday, and grabbing 3rd also in the two heats. Unfortunately, a 10” penalty was inflicted to Charles for a jump start compromising his final starting position. Off from P5 and unable to find the right gap, he had to settle for 4th at the chequered flag. On Sunday, the performance of the Monegasque driver was consistent with what seen the previous day, ending the two heats in 4th and 6th position, which granted him row 2 start for the final. But after running strongly in 4th for 5 laps, Leclerc was forced to retire due to a technical problem to the silencer.

In KF, Ben Hanley joined the ART Grand Prix top driver in the class, his fellow countryman, Ben Barnicoat mainly to carry on some tests and add track time to the development of the new chassis and components. The start of the weekend proved troublesome for the experienced British driver who was not able to even make a lap in qualifying. Barnicoat instead stopped 3rd fastest time and went on to grab two 2nd places and a 4th in the heat for front row start in the prefinal. Also Hanley had a good run in the heats despite the prohibitive starting position, closing twice in 6th and the last heat in 13th after few race contacts. From his 8th position on prefinal starting grid the veteran closed in 7th, while his younger team mate had to settle for 5th. The final had a sweeter taste, with Barnicoat jumping to 2nd in lap 4, Hanley moving up to 3rd by halfway through the race, and both never relinquishing the positions. Two podium places, a lot of feedback from the ART Grand Prix duo, and mission accomplished for Barnicoat who strengthened his 3rd position in the championship.

In KF Junior, ART Grand Prix fielded Sergio Sette Camara as main contender. The Brazilian had to retire in all of his heats due to race contacts, but the pace was clearly there. From 27th on prefinal starting grid, Sergio had good start but was demoted to the back of the field in the first lap. After a consistent race he moved up the ranks closing in 18th. The final proved quite successful in the early stages, with Sergio making it just outside the top ten by lap 5. As the race progressed, he got shuffled back closing in 17th place.
Good performance also by Millennium Motorsport satellite team driver Chaimongkol, who had two top 10 results in the heats, reached the top 5 in the early stages of the prefinal then closing in 10th, and had to settle for 12th in the final after being shuffled down the field at the start.

Armando Filini (Team Manager)
“The weekend in Precenicco was mainly aimed at testing the latest developments in our KF chassis and also the new carbon hubs that performed so well in KZ at the Euro Series.
We decided to have Hanley doing the test in full race condition in order to have a definite feedback on the material. Thankfully the test has been very successful, we collected a lot of data which will be very useful in the next races, particularly the upcoming European Championships.”


Ben Barnicoat (KF)
“We improved a lot and learned a lot this weekend, and with more improvements to come we should be stronger at Genk. The improvements we brought did what they were supposed to do and gave us a lot more consistency helping us to close the gap. It might have been closer still in the final but we've come on a lot which is really encouraging.”