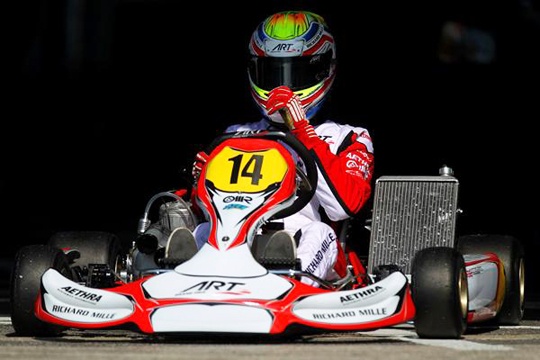 Press Release by: Art Grand Prix
ART Grand Prix Factory Team drivers proved once again stronger than all adversities at the third round of the WSK Euro Series in Sarno.
The Italian weekend featured some very intense fighting moments, and tough contacts for the ART Grand Prix boys. The very experienced British driver Ben Hanley (KZ1) turned out to be the only one to have a smooth weekend. As for his team mates, almost all encountered some harsh opposition.

Starting with KZ1, Hanley took command from the early stages by scoring the fastest lap in qualifying. One win and third place in the heats, plus the win in the final - where he led from start to finish - completed the very positive outing in the first day of competition for the British driver. Not so positive the start of the weekend for his team mate Charles Leclerc, with the 12th fastest lap in qualifying, 11th in Heat 1 – with a big scrap against Verstappen who was author of some unfair manoeuvres – and 10th in the second. Saturday’s final ended Charles’ first day upbeat, with a brilliant comeback from 10th on starting grid to 6th after checking in 5th for a few laps.
Day 1 score: 35 points Hanley, 7 points Leclerc and a grin on Team Manager Armando Filini’s face.
On Sunday, things seemed to carry on as planned with Hanley strongly in command of the first heat, and Leclerc fighting for a spot in the top 5. But yet another close encounter on lap 3 saw him drop to 10th, where he would finish. Heat 2 was even worse, as young Charles found once again the fretful and incorrect Verstappen on his path with a clutch problem, the two touching and dropping down the field, as Hanley closed in 5th having lost some of his edge. To his credit, the Dutch star would later apologize. The final grid saw the two ART Grand Prix drivers starting from 2nd and 15th. Hanley seemed unable to keep the lead in the early laps and settled in 3rd, while Leclerc dropped to 19th in the starting procedure, forced into a comeback. Unfortunately a tremendous accident involving two drivers on lap 7 had the final frozen for the remainder of the race with Hanley 4th and Leclerc 11th unable to make up positions. And yet, the standings say that Hanley has decreased the gap from the leader and sits strongly in 2nd place, while Leclerc has still good chances to make it into the top 5 with 85 points still up for grabs.

In KF, more contacts and a still not perfect qualifying had the ART Grand Prix boys race in challenging conditions. Ben Barnicoat was yet again the best qualified of the lot, with the 10th fastest lap. Out at the start of the first heat due to a technical problem, the current KF2 European Champion had to make amends in the second, but he lost 8 positions at the start and was forced into a comeback that saw him close in 8th. A 5” penalty for a push would drop him to 11th. Heat 3 proved just as frantic, with the Brit forced into yet another recovery after dropping halfway down the field at the start, but managing to take the flag in 4th. Final heat was somewhat smoother, with 3rd place gained in lap 4 and never relinquished. With 19th place on Prefinal starting grid, Ben’s weekend seemed as tough as ever. And again lap 1 would prove fatal to him, dropping at the back of the field after a contact and closing in 26th. Such hard weekend brought out the best of the young Brit as the final lights went off. At the start Ben managed to move past several drivers finding himself in 14th place. Halfway through the race and Barnicoat was in the top 10, but the laps wound down too quickly and he had to settle for 9th.
And Barnicoat had not the toughest of weekends if compared to his team mates. Moineault had a poor qualifying but made up in the first two heats closing in 9th. Heat 3 and 4 saw the French having to retire at the very first lap, unable to make it to final stage. Also Vivacqua could not be content, unable to make a lap in qualifying and missing the final stage by a mere point.

In KFJ, almost all ART Grand Prix drivers made it to the prefinals. Sette Camara and Borrelli showed good signs of improvement in the race conduct, with both drivers making the final stages also with some top ten results in the heats. Very good performance also by ART Grand Prix Finland satellite team duo Peltola and Haapalainen, with the former stopping the fastest lap of the ART Grand Prix lot in qualifying, and hitting 3 top ten results in the heats to send him to the final stage.
The usually over-excited Junior field was once again struck by penalties, but contacts still have a far too great impact on the racing weekend.


Armando Filini (Team Manager)
“The weekend was quite positive, with our drivers showing some good pace in all categories. Unfortunately we could have done a bit better in KZ1 final 2, but the slow procedure for most of the race prevented us from getting a podium. Barnicoat ran in some bad luck in KF, he had the pace to finish in the top 5, but it was one of those weekends where nothing seemed to go right for him. Too bad for the other KF drivers, in some occasions they ought to be particularly cautious in the first corner, as Moineault and Collard experienced. We are starting to see improvements also in KFJ, where almost all our drivers managed to go through to the prefinals.”

Ben Hanley (KZ1)
“I’m very happy for the win in final 1, my weekend has been overall very positive. It’s a shame I had some troubles warming up the tyres in final 2 and that we had to race most of it under the Slow procedure, but I truly hope that the drivers involved in the accident will have a swift recovery and will be able to join us on track soon.”

Ben Barnicoat (KF)
“I have been so unlucky in Sarno. After the heats I hoped my luck would change, but in fact it didn’t and I was only able to fight for the top 10 in the final. It’s a shame because I also lost two positions in the championship standings and I will definitely not be able to fight for the title. I will give my best in the final round in Genk, and hopefully I’ll grab the second place which is still very much at hand.”