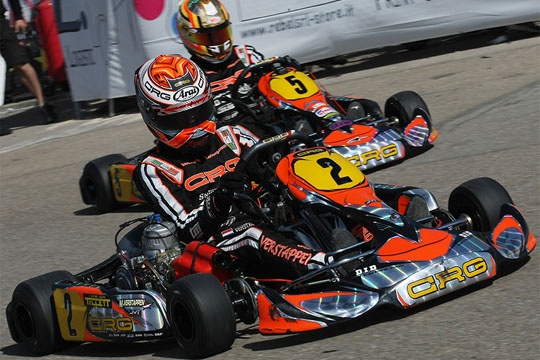 Press Release by: CRG
IN KF FELICE TIENE IS READY TO ATTACK AND TAKE OVER LEADERSHIP AFTER HIS SUCCESS IN THE PREVIOUS RACE OF ZUERA. THE 60 MINI IS AT ITS FINAL ROUND WITH MARTINEZ LEADER.
Lonato del Garda (Brescia - Italy). CRG Official team schedule is full of important appointments and. Next weekend it is already time for another round - the third - of the WSK Euro Series. The venue is the International Circuit Napoli in Sarno, which already hosted the recent event of the Master Series.

From 19th to 21st April, the WSK Euro Series will take place with all the categories crammed with entrants and with CRG drivers ready to exploit the excellent qualities of the Italian factory equipment, the cutting edge of international karting.

Five categories on track, including the 60 Mini which is at its last and decisive round: one of the young drivers taking part in the category will win the first title of the season.

VERSTAPPEN +100 IN KZ1. In KZ1 Max Verstappen is the king of the category on a CRM-Tm of CRG Holland. He is still unbeaten after the first two rounds of La Conca and Zuera and has a 100 point lead over his closest pursuer. Together with Max, other CRG drivers stand a good chance to get good results and climb up the standings: Jorrit Pex (CRG-Tm), third of the standings, and Jordon Lennox-Lamb, who arrives in Sarno behind the wheel of a CRG-Parilla after the good third place achieved in the last race in Zuera.

In KZ1, "the CRG Army" ranks are completed by the presence of Davide Forè and by the poleman of Zuera Jonathan Thonon, both on CRG-Maxter, together with Fabian Federer on CRG-Modena.

In KZ2, Giovanni Martinez (CRG-Maxter) will race for CRG together with other private drivers such as the Polish Bartosz Idzkowski of DTK and the Russian Philipp Buznikov of the 77 RUS team. Marco Zanchetta, on Maranello-Tm, is the leader of the ranking.

TIENE ATTACKS IN KF. In KF focus on the reigning world champion Felice Tiene, who achieved a resounding victory in Zuera and he is now ready to confirm his presence among the leading actors of the category on his CRG-Parilla. After the second round in Spain, Tiene is third in the standings, 30 points behind the leader Boccolacci. So, the round in Sarno is crucial for the championship. In KF there are also the 2012 KF3 Euro Series champion, the Spanish Alex Palou, and the Canadian Zachary Claman DeMelo racing for CRG, both on CRG-Parilla.

With Forza Racing there is the Polish Igor Walilko, with  PF International the English Mark Litchfield. With LH Racing the Danish Kevin Rossel, the Finnish Jussi Kuusiniemi and the Spanish Pedro Hiltbrand Aguilar.

THE 60 MINI ASSIGNS THE TITLE. In the tiniest category, the 60 Mini, the situation is particularly favourable to the Spanish Eliseo Martinez on CRG/Hero-Lke of the Gamoto team. The Spaniard, after the first round of La Conca, has got a remarkable lead over his pursuers in this final sprint: Martinez is 45 points ahead of his teammate Abdul Gafar Muizzuddin, but despite that the battle for the title is going to be tough.