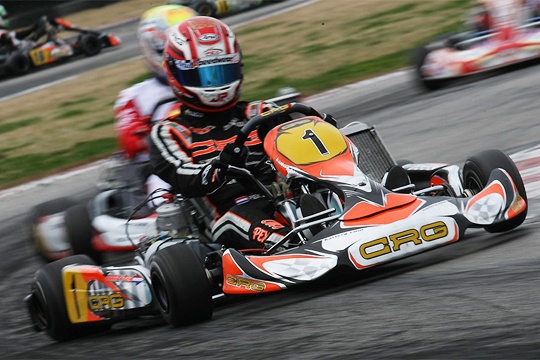 Press Release by: CRG Racing Team
Excellent performance for the Crg drivers at their first appointment in the German Championship. In both finals Pex, Forè and Ott achieve the first three positions of the podium.
DEUTSCHE KART MEISTERSCHAFT – AMPFING, 14th APRIL 2013
Another great result for CRG in Germany last weekend on the racetrack of Ampfing, in the first out of five rounds of the German championship, DKM Deutsche Kart Meisterschaft, with 140 entrants coming from 18 different countries.

The KZ2 race of Ampfing was literally dominated by last year's edition winner, the Dutch Jorrit Pex of the CRG Holland team, Davide Forè of the Polish team DTK and the German Stefan Ott of CRG Holland, all on CRG-Tm.

After setting the fastest time ahead of Forè, Jorrit Pex won both the finals of the German event, always preceding an excellent Davide Forè and a surprising Stefan Ott.

CRG WINS HANDS DOWN THANKS TO PEX, FORE’ AND OTT. For Jorrit Pex, the 2012 champion of the German Championship and of the WSK Euro Series, this is the first double success of the season.Now, the young Dutch driver is the current leader of the category in the DKM with 52 points; David Forè follows 12 points behind. The Italian driver battled for victory in both the finals and even set the fastest time of the second final.

Tough battle also for the third place. In both the finals it was the German driver Stefan Ott who managed to get it after a thrilling battle with the other competitors. Ott is now the third of the standings with 32 points.

Also the other German driver of CRG Holland, Marcel Jeleniowski, made himself conspicuous thanks to an excellent fourth place achieved in Final 1: so, eventually, there were four CRG karts in the first four positions in race 1.

NEXT APPOINTMENTS. The forthcoming appointments  of the German Championship are on 5th May in Wackersdorf, on 14th July in Kerpen, on 18th August in Hahn and on 13th October in Genk in Belgium.

All the results on www.kart-dm.de/startseite/