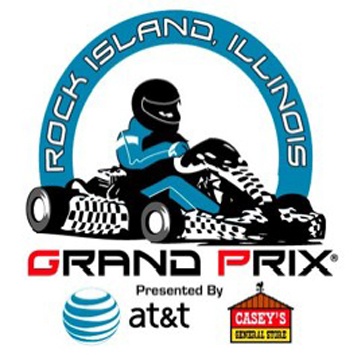 Press Release by: Briggs e Stratton
ROCK ISLAND, Ill. – The Rock Island Grand Prix, presented by AT&T and Casey’s General Stores, has announced that vintage kart races will be featured as part of the race lineup at this year’s event.

During the past two years, with the help of Jim Thompson, vintage karts from the 50s, 670s, 70s and 80s have been featured as an exhibition race at The Rock. This year they will share equal billing with modern race classes. “We believe ours is one of the few places in the world where vintage and modern-day karts will race at the same venue,” said Roger Ruthhart, RIGP president. As a result, vintage karting will receive the same great public exposure as modern day racers – not to mention exposure to karters who may not be familiar with vintage racing.

Vintage karters will run a similar program to modern-day racers except their program will be contained to Saturday. They will not do timed qualifying but will run two Saturday morning practice sessions and a mid-day race. “We will do grid introductions and race play-by-play by Rob Howden just as we do for the other race classes,” Ruthhart said.

There will be some differences. Vintage races will be run as “gentleman” races. There will be no tech and how the karts will be grouped will be determined by the vintage racers in conjunction with Rock Island Grand Prix officials, based on the kart counts and entries.

The entry fee will be only $50 and there will be no purse paid, but trophies will be awarded. Transponders will be required and are available for rent. Vintage racers will be grouped in the back of the pit area near the city parking garage so that they can leave after Saturday racing. Some have indicated they intend to run soft tires and enter the Sunday Pro Open class. “With this setup, they will be able to enjoy the camaraderie that is part of a vintage kart weekend, but also be part of the excitement of the world’s largest karting street race,” Ruthhart said.

Vintage racers will certainly find a different vibe at Rock Island, with thousands of spectators lining the track. The race course is built within the city streets with runoff on both sides and two layers of plastic barriers, crash pillows, as well as a double layer of fencing. The track design does not appear technically challenging with five left hand turns one right. But variations in pavement, bumps in the street, shade from trees in some areas and bright sunshine in others, and a continuous build-up of rubber over the weekend give the track its own unique challenges. Straights are 750 feet which should give the vintage karts an opportunity to flex their muscles.

Vintage karters will be able to make reservations in the Grand Prix block at the host hotel, the Rock Island Holiday Inn, as well as Jumers Casino & Hotel and a wide selection of other area hotels listed on the HOTELS page of the Rock Island Grand Prix website. There are also campgrounds within a 10 minute drive.

“Many vintage karters began their racing career at the many street races and parking lot events that were held long before we had purpose-built kart tracks. Participating at the Rock Island Grand Prix will give them a chance to re-experience those roots while at the same time enjoying the festival atmosphere that only the Rock Island Grand Prix offers. We realize there are some conflicts, but we hope to see many of the vintage kart guys who want to get out and race at our event,” Ruthhart said.

Additional information can be found soon on the Rock Island Grand Prix website at rockislandgrandprix.com. Questions can be emailed to grandprix@qconline.com or posted on the vintage kart forums.