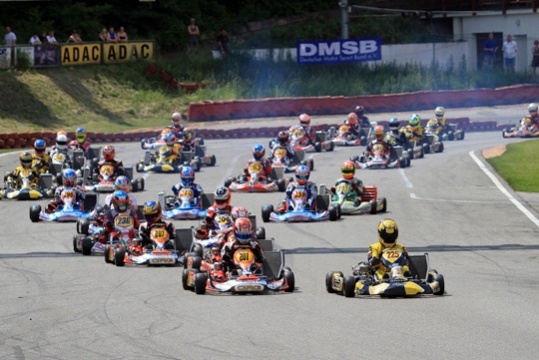 Press Release by: Races
After a break of more than six months, engines will be roaring again at the German Kart Championship during the following weekend (April 12th-14th 2013). In Ampfing, the first of five ranked races will take place and the lists of participants are full once again. More than 140 drivers from 18 nations have registered themselves, among them numerous World- and European Champions.

Prior to the first start, the three grade series of the German Motorsport Foundation are already highlighting their positions in Kart racing. Drivers from 18 nations will start at the kick-off in Ampfing and are thereby making the series into one of the most challenging in all of Europe. This success doesn’t come out of nowhere though; the DMSB follows the saying “Not moving forward means getting left behind”. For a couple of years, the topmost German Motorsport authority has been expanding the offerings of the racing series and is now providing a highly professional overall package for drivers and teams. In addition to an experienced organizational team, the well-tried race control provides a lot of fairness on the tracks. Additionally there are broadly based public relations, including a Facebook fanpage, an informative website and a video live-stream, which sends up to 13 hours of live images into the living rooms of kart racing fans during all racing weekends.

The fans can definitely look forward to exciting kart racing. The lists of participants of the three grades DKM, DJKM and DSKM are filled with top-class names. At the German Kart Championship, 40 drivers will start at the kick-off and all of them want to replace Dennis Olsen (Energy Corse). The Norwegian managed the feat of winning the German Kart Championship (DKM) in his first KF2-season ever. After this success, Olsen now dares rising to Formula Racing and will not participate in 2013 to defend his title. Among the favorites regarding his succession are definitely Vice Champion from 2012 and German Kart manufacturer Mach1-Kart’s factory driver John Norris (Mach1 Motorsport), Thomas Krebs (RS Motorsport) from Denmark and former team mate of last year’s Champion Vasiliy Romanov (Energy Corse) - but the reigning Junior Champion Hannes Janker (TB Motorsport Racing Team) should also not be underestimated. “After my double-victory in the DJKM last year, I’m hoping to be able to drive in the front again this time. Our material is great and I’m willing to give it my all,” says the Franconian highly motivated.

By achieving his DJKM-Championship title last year, Janker ended a German dry spell that had lasted for eight years. Now the cards will be dealt anew and with Martijn van Leeuwen (Keijzer Racing), a Dutchman is among the big title contenders. The youngster finished on the overall third place last year and is already looking forward to the season kick-off: “Last year, things in Ampfing already went really well for me, but this time I want to win. I like the track and I’m very confident after having had a great start of the season.” The German competition should not be underestimated as well though. Gino Wetzels (DR Racing Germany) and Toni Wolf (Energy Germany) were the fastest rookies in 2012 and will also try to reach for the crown. Maybe a completely different driver will be on top of the podium in the end though.

The shifterkarts are the strongest force once again, counting 51 participants, and will be among the audience’s favorites again. Dutchman Jorrit Pex (CRG Holland) experienced a unique season in 2012. In addition to defending his title in the German Shifterkart Championship (DSKM), he also won the European Shifterkart Championship and the WSK Euro Series. In 2013, he will start at the DSKM again and will try to win the title for the third time in a row. But his task will not be easy: Counting Arnaud Kozlinski (AVG Racing), Davide Foré (DTK Racing Team Poland) and Fabian Federer (Kart Südtirol), as many as three reigning or former European- and World Champions will also participate. There will also be strong competition from Germany, one of whom will be the Champion of 2006 Marcel Jeleniowski. He will start for the team CRG Holland and will doubtlessly drive in the forefront once again.
The 1.060m long Schweppermannring, located 50kilometers south of Munich, belongs to the most popular tracks among the drivers. Situated similarly to a stadium, a unique setting and atmosphere is always provided for drivers and audiences. The broad start-finish-line offers a chance for overtaking and caused close racing decisions in the past.

Things will get serious for the participants for the first time on Saturday afternoon (April 13th 2013) during qualifying. Afterwards, twelve Heats will follow all in all, which will lead to the starting line-ups for the final races on Sunday (April 14th 2013). These will start with the German Shifterkart Championship at 11.15am. All fans at home will be able to follow the events in Ampfing on Saturday and Sunday from 8am on via video live-stream. Additionally there will be lots of information on the Facebook fanpage. 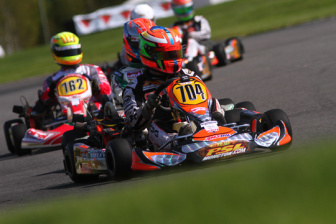