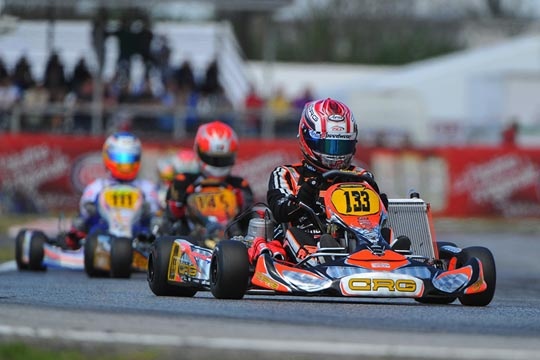 Press Release by: CRG
TOUGH WEEKEND FOR THE CRG DRIVERS IN SARNO FOR THE SECOND ROUND OF THE WSK MASTER SERIES. THE BEST RESULT IS ACHIEVED BY PEX IN KZ2 THANKS TO TWO THIRD PLACES. VERSTAPPEN GETS TWO GOOD PLACEMENTS BUT NOTHING MORE. GOOD PERFORMANCE FOR FEDERER. HORIO AND NYLAND, IN KF, GOT SLOWED DOWN BY AN ACCIDENT

Lonato del Garda (Brescia - Italy). CRG had a hard time during the weekend in Sarno, on the International Circuit Napoli for the second round of the WSK Master Series. Anyway, things were not as bad as it may seem: Jorrit Pex - competitive as usual - managed to step twice onto the podium in both the finals, after battling for victory. Verstappen was the other bright spot of the weekend: he achieved two placements, managed to keep the top of the standings and the championship seems to be tightly in his hands.

VERSTAPPEN'S WINNING STREAK HAS COME TO AN END. Six victories in a row in KZ for Max Verstappen, but in Sarno the Dutch driver's winning streak has finally come to an end. After his double win in the WSK Master Series of Muro Leccese and his four victories in a row in the WSK Euro Series of Muro Leccese and Zuera, in Sarno Verstappen had to be content with two placements which, anyway,allowed him to keep a 31-point lead over his pursuers in the championship. Jorrit Pex is the sixth of the standings.

In Saturday's first final, Pex grabbed the third place right at the end of the race. The winner was Paolo De Conto, while Charles Leclerc was the runner-up. Verstappen, after two rather unlucky qualifying heats, was the protagonist of a great recovery from 18th to 6th position. He even set the fastest lap time.

In Final 2, on Sunday, the two CRG Holland Dutch drivers were among the major protagonists, with Jorrit Pex third, again, after a good performance which saw him always in the top positions. He finished behind Riccardo Negro and Charles Leclerc. An excellent Max Verstappen, seventh after a thrilling recovery from the last row of the starting grid where he got relegated because of two unlucky qualifying heats.

Fabian Federer's overall performance, on CRG-Modena, was good too. He placed seventh in Sarno after the first final on Saturday, while in Sunday's second final he had to pull over - when he was fifth - with one third of the race remaining for a technical failure to his bumper. Federer now occupies the 8th position of the championship standings.

HORIO AND NYLAND INVOLVED IN AN ACCIDENT IN KF. In KF, the two CRG drivers participating in the WSK Master Series of Sarno were the Japanese Fuma Horio and the Finnish Niclas Nylund, both on CRG-Bmb. They both managed to qualify for the final phase at the end of hard qualifying heats where Horio's best results were two second places, while Nylund achieved a good fourth place. Then, great expectations after the Pre-final, especially for Nylund who placed 9th.
Unfortunately, a double crash at the beginning of the Final prevented the two drivers from getting the good result they deserved: Nylund was obliged to pull over, while Fuma dropped back to the back positions and did not manage to close the gap. In KF the winner was Karol Basz, the runner-up Dorian Boccolacci. Third Martin Kodric.

DE FRANCESCO AND MONGER FINALISTS IN KFJ. Among the young CRG drivers of the private teams of the KFJ, the best was Devlin De Francesco on CRG-Bmb (DFR). His performance in the final phase was excellent: he achieved a great recovery from the last positions on the starting grid due to bad qualifying. In the Pre-final he recovered from17th to 11th, while in the Final, where he started from the 21st slot on the starting grid, he placed 18th. The English Billy Monger (Forza Racing) placed 24th in the Final, after his 13th place in the Pre-final. The Russian Nikita Mazepin was the KFJ winner.

BITTER FINAL FOR MARTINEZ. In the 60 Mini, the young Eliseo Martinez on CRG/Hero-Lke of the Gamoto team had a rather unlucky weekend and, finally, he had to leave the leadership of the standings to Kush Maini. In Sarno, Martinez only managed to get a fifth place in the Pre-final and the 8 points he gathered at least allowed him tokeep the second place of the standings, ahead of Rasmus Lindh, winner in the Final. In the Final, Martinez got hit from behind and only got a seventeenth place, right ahead of the other Gamoto driver Kostantinos. Abdul Gafar Muizzuddin, on the other hand, placed 8th and he is now 9th in the championship.

NEXT APPOINTMENT. The next round of the WSK Master Series is scheduled on 5th May on the Friuli Venezia Giulia Circuit. In two weeks, on 21st April, the third round of the WSK Euro Series in Sarno.