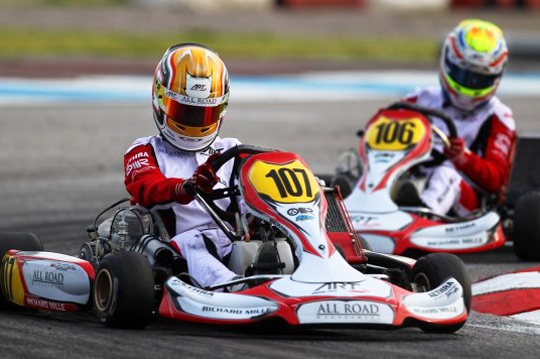 Press Release by: Art Grand Prix
ART Grand Prix racing team leaves the Circuito Internazionale Napoli in Sarno with two podiums, some fastest laps and heavy championship points after the positive performance in the second round of the WSK Master Series.

The KZ2 gearbox category proved yet again the one bearing the goods. Both Ben Hanley and Charles Leclerc showed once more the qualities and performance of their equipment, as the Brit had a commanding first part of the weekend stopping 2nd fastest time in qualifying and clinching the win in both heats with the fastest lap to his credit. Only bad luck had the experienced driver closing the final down in 10th due to a contact in the very last lap while fighting for 2nd. To get the goods was his younger team mate Leclerc, who inherited the position after shadowing him for half race distance. Charles’ consistent performance continued on Sunday with 4th and 3rd place in the heats, which granted him row 2 start for the final. Hanley’s troubles continued as well, as the Brit managed to come back from 10th on heat 1 starting grid all the way to 3rd with one lap to go, but yet another collision saw him drop at the back of the field. The second heat then saw the Brit in a frantic attempt to make up positions, and at the chequers Hanley took the flag in 14th place to start the final in 18th. Ready to give all they had in the final, the ART Grand Prix duo was on fire at the green lights. After a good start, Leclerc took command of the race on lap 3, while Hanley was in the top 10 after only 5 laps. With Leclerc leading, the Brit made up ground grabbing hold of 6th place by lap 7, then 5th few laps later. Hanley’s comeback was complete with 2 laps to go when he disposed of his rival to close in 4th at 1 tenth from the podium, as Leclerc had given in to the pressure from behind with 3 laps to go closing in 2nd. Two podiums and a great comeback for the ART Grand Prix boys bode well for the next race.

In KF category, ART Grand Prix colours were represented by Ben Barnicoat, Thiago Vivacqua and Valentin Moineault. But the weekend was tough with few too many contacts.
Particularly for Barnicoat and Vivacqua. The British driver started off well by stopping the 7th fastest lap in qualifying and then continued with a very good first heat where he closed in 2nd. In the following one Ben managed to finish 2nd again, but a 10” penalty as a result of a contact saw him demoted to 8th. In the final heat the young Brit got pushed at the start and dropped to 12th, having to make up ground and closing in 7th. But the mood in the ART Grand Prix camp was not the best. In fact, after a good qualifying session, Brazilian Vivacqua had a tough time in the heats with two contacts that forced him to retire in the first lap compromising the access to the final phase.
Tough weekend - not contact-free - also for Frenchman Moineault who made up for the 26th laptime in qualifying with a 10th and two 12th places in the heats to start 22nd in the prefinal. A consistent comeback saw the French closing in 14th, with Barnicoat moving to 4th by lap 2 and staying there till the chequered flag. In the final, the Briton had an early scuffle for 2nd in the first few laps, but then he had to settle for 4th grabbing valuable championship points. Yet another contact saw Moineault dropping down to 26th after the green lights to close in 16th.

In KF Junior, ART Grand Prix team had to do without Venezuelan Diego Borrelli due to school commitments. Sergio Sette Camara and Yifan Xia had to race their socks off in Sarno, but were unable to make the final also due to some race accidents. ART Grand Prix colours did feature in the final thanks to Sasakorn Chaimongkol racing for Millenium Motorsport satellite team. The Thai driver had an eventful weekend, took 7th in the first heat as his best result and managed to finish 17th from 31st in the final. Positive outing also for Isa Alkhalifa from Bahrain One Racing satellite team, at his debut in the competition, managing to get to the prefinal after an eventful weekend.

Armando Filini (Team Manager)
“It’s no secret that the many contacts have had a toll on our weekend, as we had the potential to do better particularly with Ben Hanley in KZ2 and Ben Barnicoat in KF. However, considering the many penalties inflicted in Sarno we understand it can be difficult for the Stewards and Race Officials to oversee everything. We hope that with a strict application of rules and sanctions all drivers will abandon any unsporting behaviour.
Going back to our performance, overall we’ve had a positive weekend. In KZ2 Hanley was by far the fastest driver on Saturday and Leclerc almost took the win twice.
In KF Barnicoat was able to fight with the top all weekend, but we were really at the limit and just missed the podium. Moineault was at his debut on this circuit, so it was a good learning experience that will serve him for the next race, again in Sarno.  In KFJ we are still working very hard but our drivers still need to make experience in such a highly competitive category.”

Charles Leclerc (KZ2)
“What a weekend! The material worked really well, I had a very good race in Final 1 with a fantastic comeback from 7th to 2nd. Then on Sunday I managed to stay in the top four all day, I led for big part of the final and I went very close to grab the win, but I gave all I had and I’m very satisfied with my performance.”

Yifan Xia (KFJ)
“Sarno it’s quite a difficult track, I didn’t have an outstanding weekend but I want to thank ART Grand Prix Racing Team for the incredible support. I’m learning race after race, I’m trying to improve on different aspects and experience is very important. I will be in Sarno again in a couple of weeks for the WSK Euro Series, and I hope I will be able to do better.”